I heard about him years ago from my friend Radena Valkanova. She is very close to the person from the title. For me Ivan Panteleev was an image, he existed in the stories shared by Radena. From these stories he seemed nice. Radena really loved him, both for himself and for their memories. She described him as a rebel who fights against the established order, a seeking man, wanting to do something different in the theatre. And, for the short period of time he stays in Bulgaria in the 1990s, he does it. He puts many performances, with which he really fights against the frames, goes outside the box and shows the audience something different, crazy and new.

Until last year, Ivan existed in my life, but rather in words. I am an actor since 2002. Since then he has not come to Bulgaria to work. Radena has shared that he does not want to, he is very busy in Germany, where he has a successful realisation as a director and is among the world’s biggest names. He has put many productions in the big theatres, he has worked together with Dimitar Gotchev (one of the most successful Bulgarian directors abroad), Samuel Finzi (like him, he has also escaped from Bulgaria with successful realisation in Berlin), and many big German stars. It is understandable why he does not want to come back here. In Berlin, he has achieved a lot, he has started from scratch, he has created on a world level, and he does not want to deal with chaos, figuratively speaking.

One time, in May 2017, before a favourite production of ours – “God of Carnage” – Radena came to us almost unconscious. I asked her what has happened and she excitedly shared the secret that Ivan will be watching us. “At last I will see Ivan” – I told myself, let Radena be the one worrying. The performance went great. After that, I went to meet him. He seemed very nice, we talked a lot, and he seemed nicer and nicer. He liked the performance and the cast very much. At the beginning of Season 2017, it became clear that Ivan Panteleev would return to Sofia to put on Bulgarian stage after 20 years of absence a play by Maxim Gorky. Naturally, Radena was telling me everything. We, the four actors from “God of Carnage”, will have nice roles. So he has really liked us. There was a rumour spreading in the theatre, who he will take, what will be the cast, when will be clear. Believe me, it can become real hell in the theatre, when it is clear that a good and interesting director will come.

The casting came out, the months disappeared, and it was time Ivan to get on the plane for Bulgaria. Again, I will release secret information, kindly provided to me by Radena. In the days before his arrival, Ivan regretted a lot that he has agreed to work in Sofia. He was worried what he would do with these strangers, after all he did not know anything about us.

The story could have ended here, but exactly the last sentence hides the thing. I want to tell you about.

About Ivan’s talent to be a true man – with a cause that he pursues skilfully. We, the actors, are nasty, mean and vengeful creatures, wolves ready to tear if they see weakness before them. A whole pack of wolves, 12 individuals with very strong ego – to be tamed by one man, weighing 50 kilos, for two months, is a big thing, which does not happen often in our profession. Generally, this happens with intellect, and because Ivan possesses many other qualities, but mostly straightforwardness and frankness. I think these two qualities has become something of an ancient relic. Extremely rare to see, they have existed centuries ago in other civilizations, and today we talk about them rather as something lost, present only in the books.

Rehearsals began, and he told us about himself, what he likes and what he hates. An important business card, with which he did not leave anything about himself unsaid. He just opened to us as he is – with his weaknesses, strong sides, fears, searches and strivings. I found slightly disturbing quite many details in the things he did not like, but when he said them sincerely, he countered my thoughts. His words were full of a reason for many reflections. He talked all the time how a society needs irritants, alert people, visionaries, who do not reconcile with reality and always seek for the different. Exactly these people are inconvenient because they burn you and make you think and reflect, get out of your comfort zone and strive for something bigger, more elevated, more different than the usual. They spoil your comfortably arranged routine and keep you alert.

Ivan is one of these people. He has the mission to provoke society with the theatre he does. He has built his own techniques for this, has his own methods. He wants to irritate, to be inconvenient, because, as he writes it and I say it through my character in the play, “the new man can only be born in an absolute intolerance”. I realized he is right. It is very important the society to be alert, to not accept what it hears, to seek for the truth and the meaning of life around us in the context of the whole. Only the alert society can achieve great things. I think that here in Bulgaria we have a great need for such people, because we very easily reconcile with what we hear, without thinking whether it is true or not, we very quickly forget and even big injustices, which is why they continue to happen. 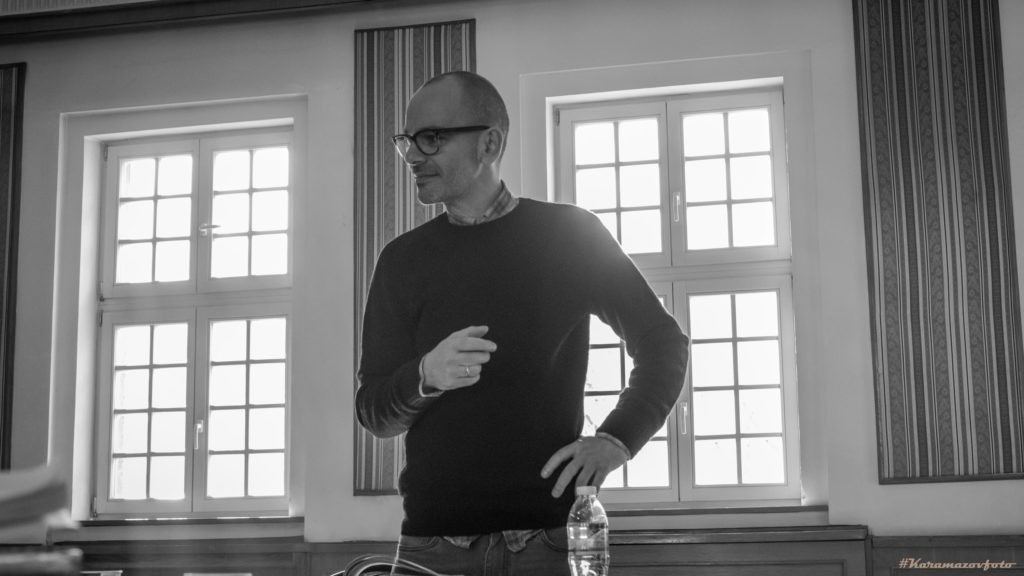 In this context and driven by these thoughts and feelings, he began to create his theatre provocation through us, the actors. I will not tell you about “NEO-Summerfolks”, you will come and see it, but to Gorky’s text he added his own thoughts and searches. And, for some of the sharpest texts he chose me and Teodora. One of the methods he has learned from the bid masters is that the texts, which are sharp, bold and insolent, which harshly tell truths, should be put in the mouths of actors who look good and who are, so to say, audiences’ favourites. It is done, so the viewers can hear the text and though it is burning, they forgive the insult from the stage because of their favourite actor. You can forgive everything to your favourite actor, though he speaks terrible, ridiculous and exposing himself things. It is even easier with women. Put the most complex, most burning text, in the mouth of a sexy actress with boobs and butt, so the viewer can hear it, understand it, and forgive. So, I say this monologue of mine and the audience applauses. Ivan was in shock, how can I spit on them and they applaud me. He began thinking about it and came to conclusion that it is a form of defensive reaction, we do not agree very much, but we pretend to agree and understand. I do not know if it is true, but it is an interesting fruit for thought. From similar cases, he states that there is a lot to talk about with the society in Bulgaria, to provoke and discuss, because the mission of the theatre is exactly this – “Theatre is maybe the last place where the society thinks and discusses out loud, and most importantly – we do it together. Theatre is a moment of collective consciousness”, again his text, performed by me.

In Germany, everything is arranged, there are almost no problems there, and Ivan said that it is more and more difficult for him to find topics, around which to form his productions there, while here in Bulgaria there are lots of topics and problems. We have to start solving them. Hardly Ivan Panteleev will solve these problems, but at least he will try, hardly I will change the way of thinking of the young people with my texts on my website, but at least I try. Who knows, something might just happen!

Ivan Panteleev is an extremely intelligent person. This gives him an advantage and makes him a nice rebel, not insolent, presumptuous person. He knows where and how. He possesses also a talent of a psychologist. He needs just one glance, and he has already scanned you and he knows the most important about you. Once he told me two sentences about my existence and he shocked me. He hit the arrow right in the middle. He does not know me, how could he understand this? After that, he shared with me that “my eyes are open and unprotected and everything is seen through them”. This won me even more. Straightforwardness does not make him quite convenient person. If now he does not like you, he will tell you. I am sick of servile talking and hypocrisy. I admit, this kind of communication respects me. Such people are not convenient and they are often not quite liked, but they are very important to the others, important because they provoke. For me, this is the honest way of existing, I also try to be such person, though I see it is not easy. You just make enemies this way. But let’s, better honestly than with a lie. Not everyone will understand a production like “NEO-Summerfolks”, not everyone will like it, but it is important for the Bulgarian theatre. It is important, because it is an alternative, something different, something strange, that we have not seen, but we have to touch at least once! It raises many questions, many topics, throws many heavy and painful slaps and makes us think about our own life. Such productions also develop the audience. For us, the actors, it is also a challenge to perform in such production. A test, because it is difficult for us to wait, watching the colleagues as an audience, and when your turn comes, from a viewer you become an actor who fights to conquer the audience. Those of you who have not seen the production will wonder what I am talking about, but in the coming season you can see it, if you are interested of course.

Ivan thinks about the audience. He thinks how to share with them big topics through his productions. He once told me that “everyone with an access to a large audience should be responsible for it”. He should cultivate taste, point the thinking towards constructive goals, develop in it desire for creative action. We, the actors, have such audiences of fans in the social networks and not only, and we do not do anything. As people serving as examples, we should educate and work for it, mostly for the young people, who seek and do not know. We should push them to the truth and show them the right direction. I, provoked by Ivan, started doing it.

He is one of the people who move the world. Maybe modestly, but they move it. I am the proof of this. He “moved” me, I will push someone else to act, the other – someone else, and thus the wheel will spin. I thank Destiny for meeting me with the director Ivan Panteleev, I am glad that I met the man Ivan Panteleev. Such meetings are not often, and when they happen, we should appreciate them. I wish myself future mutual creative work with him.

P.S. Life is a market, everyone is trying to lie to you and pay less. But, everything has its exceptions. A small but important detail, which should not be forgotten.

With the support of Glenfiddich Whisky