“Delhi Dance” and “God of Carnage” with tours in France

After the big tours of “Casanova” in Avignon in 2010 and in Paris in 2012, Vladimir Karamazov will perform again before the French audience. In January, the play “Delhi Dance” by Ivan Viripaev will be presented on a big stage in Théâtre national de Toulouse in Toulouse. In February “God of Carnage” by Yasmina Reza will tour in Paris. Other works of the actor with representatives of French culture include with director Thierry Harcourt in the play “The Ideal Husband” – production of the National Theatre, and with director Franck Deyris in the film “Naive”.

“Delhi Dance“, directed by Galin Stoev, is one of the new productions of the National Theatre “Ivan Vazov”. It will have 8 performances at Théâtre national de Toulouse – on 11th, 12th, 13th, 16th, 17th, 18th, 19th and 20th of January 2018. It will be performed in Bulgarian with French subtitles. 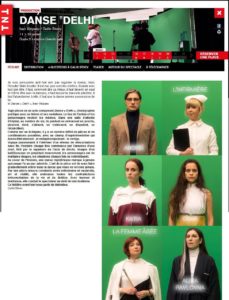 The hit play “God of Carnage“ by Yasmina Reza, directed by Anton Ugrinov, will be presented to the theatrical audience on 9th and 10th of February 2018 at Théâtre de Fénelon-Sainte-Marie in Paris. 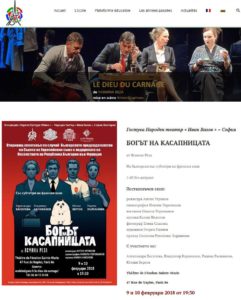 Tickets can be purchased at the ticket offices of the theatres or online. This is the first appearance of both productions abroad.