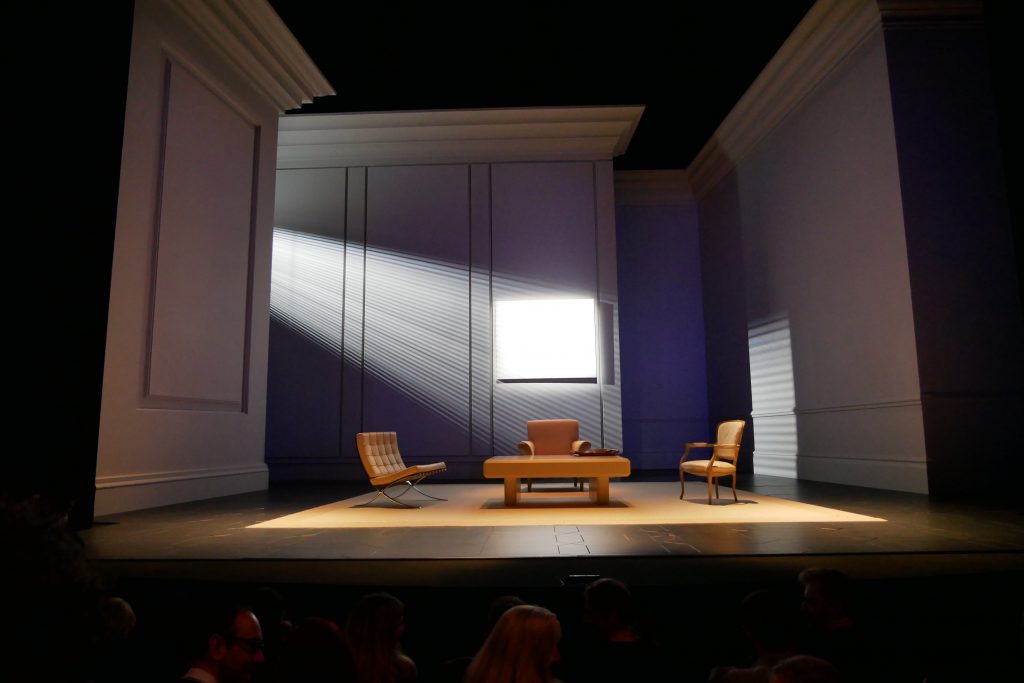 At the end of December 2016 I went to London for the Christmas and New Year holidays, as well as on some theatrical “missions”. The main one was “Art” in The Old Vic. I had tickets for several productions, and I was certain that on 27th December I’ll see “Buried Child” with Ed Harris. I went to the theatre earlier, had champagne there, walked around, impatient for the start. I had 13 more minutes. And then came a woman and told me I was sitting on her seat. I showed her my ticket with the same place as hers. We were just about to start arguing with the ushers, when I saw that actually… my ticket was for the next day. This meant that today was “Art” (my main mission this time in London).

I got all sweaty and felt sick. This was the most important production I wanted to see, I got the ticket 4 months earlier. Row 5, seat in the middle, in my favorite The Old Vic. For the same play in which I perform in Bulgaria. The challenge was the time – I had only 13 minutes and the quite big distance from Trafalgar Square to the theatre, on the other side of the Thames. Traffic jams in London are terrible. I thought, “This is the end, I won’t see “Art””, but my character took over. I got on the street, hailed a cab and started explaining to the driver how extremely important is to get there in 10 minutes. I didn’t stop talking and this man, by some magic, took the distance for exactly 10 minutes, through some secret little streets. Exactly 2 minutes before “Art” started, I was in the theatre. Because obviously I had to see this performance.

In the “short” hour and a half of the production many things happened in my head. I imagined our “Art” on this stage. It would have been wonderful. It would have been on its right place. There were many similar moments in both productions – theirs and ours. It’s like life was telling me something exactly with these moments. Things we usually do during and after the show happened here as well. There were exact moments, lines, pauses, audience’s reactions, just like in our production. The idea of the scenography was the same but with different execution. The pauses in the production were exactly the same length as we do them. The audience reacted in a similar way to Ivan’s monologue (the peak moment of my character). The skier that Mark was drawing was exactly the same as Julian Vergov draws it in our production, only smaller. Everything was exactly the same. So much the same that it was a bit startling. I even thought if there is some international formula for drawing a skier, because Nikola Toromanov, our designer, showed Julian how to draw it.

At the end after the show outside the theatre I saw one of the actors. Just the same way we do it, he put his hood on, crossed the traffic lights and headed down the street. Same play, but in a different language, in another theatre and with other actors.

I didn’t watch the performance as member of the audience – I watched how they act, how they appear, how the audience reacts. I can boldly say we are better, and for reasons outside the actors:

“Art” in The Old Vic is a really good production. The weirdest thing in this case is that I was the only one in the audience who knew what was happening in the actors’ heads and what their feelings were while they were performing.

After the show I pondered over faith, theatre, stage arts in Bulgaria… If we were in England, we would probably be performing “Art” exactly there, on that prestigious world stage. There was no other reason for me to wish to be an actor in London, except for the fact that in this country theatre has no enemy. For the audience the theatre is a prestige, the best spent time, a tradition and so much more. Theatre there doesn’t have to fight chalga, governments, doesn’t have to try to survive, the actors don’t live in misery, they are not divided to famous and unknown. I wish I was a part of such theatre. But… I am not! I hope this time will come for the Bulgarian theatre as well. But… we have to fight for such time, because the qualities of the Bulgarian actors excel the ones of the English actors. Really! We are better. But our system deprives us of faith and motives. I will fight because Bulgaria also needs theatre. And I will make everything in my power to perform our “Art” in London. And to invite the actors from The Old Vic’s “Art” to watch us. To show them this and that. It would be great.

I’m so glad I became an actor!