About a Production and a Friendship 23 April 2018

For the small jubilee (the 50th performance on stage) of “God of the Carnage”, I’d like to write this text. And to explain how important it is in this acting profession of ours that things happen with like-minded and close people, with whom it’s a pleasure to live this life at all. When a project is formed with such a company, success is almost always guaranteed. In this production, once again, the cards were arranged like that. We gathered all friends, particularly friends of many years. With a similar view on theatre, with a very similar taste, who would never be hypocrites to others, and always the truth is the most important in the relationship. I will tell you briefly about every person on the team and about my friendship with him/her. After the success of the play “Art”, which we performed for a long time and which is already a nice memory for us, we reached out to the other really good text of Yasmina Reza – “God of Carnage”. Initiator was again the director Anton Ugrinov. Great text, but difficult. Some people are sitting on some chairs and talking. I admit, to all of us the film version of the play under the direction of Roman Polanski and star cast was a bit boring. There was something in the movie not quite. So it didn’t put us down, but on the contrary – motivated us. After really carnage rehearsals, during which we quarrelled, got angry, argued (again, there are no barriers to the communication between us), our production emerged. In my career, it is one of the most indisputable. It is liked by both the audience, and the critics and industry professionals. There are two main factors to that – the Director who made us perform so fine and delicate, and Life. I will try to tell about the life and the relations it has entwined among those five of us, who have made this production. 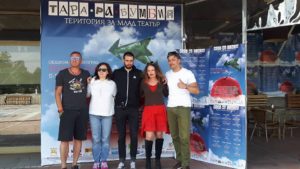 I met Anton Ugrinov in NATFA in 2000. He was two years ahead of me, in the acting class of Stefan Danailov. We became very good friends. He was the person with whom I laughed most. We could make a laugh out of every situation. Up to now, in my head, he is the friend with whom I’ve laughed most. We have many stories. Here is one: Once we were together at the sea. All the time we made up fun stuff, imitated people, thought of situations, and played them. It was the funniest summer. Very often we had stomach aches from laughing, I mean literally. Once, while we were walking in Balchik along the coastal street, I played another sketch and Anton was laughing out loud. I was so absorbed that I fell into an open ditch. I was beaten pretty serious. My leg was scratched and in blood, and my white linen trousers had turned into a torn dirty rag. But, instead of moaning and complaining about what happened, Anton and I couldn’t stop laughing. We’ve been giggling from all the heart for so long that people thought we were crazy. Now that I write this, I realize that many years have passed since then and many things have changed. I myself have changed a lot. How easily I’ve been taking things back then, how lightly I’ve been looking at life and how much I’ve laughed.

Several years later Anton graduated NATFA and decided to become a director. Two more years later he had to get the diploma and make his first production. He invited me and Alexandra Vasileva. We rehearsed the play “Vernissage” by Vaclav Havel. I will remember these rehearsals all my life. And we laughed a lot again. With this play Anton became a director. I enormously like his persistency, exigency, humour, taste and desire for improvement.

Someday I will write a whole book about Alexandra. In my phonebook she is Alex – the old friend. She is the person related to the theatre who I know longest. Since the far 1996. We were together in the Boncho Urumov’s school. Together since then, we are like brother and sister. We’ve helped each other a lot, we’ve gone through many things. Her road was harder than mine, but the difficulties gave her more discipline and drive. I’m more spoiled. A week ago I watched her on the stage of the National Theatre and I realized that I am so used to her that she is really a huge part of my life. Something like a hand or a head. And quickly a nasty thought passed through my mind, I have only nasty ones passing, what would it be if she’s not there tomorrow? And I shuddered. Lately, we’re fighting, pecking at each other. Since we know everything about each other, we vary our communication a little. Together with her, we applied for NATFA, we got accepted in different classes, we separated briefly and we cried, but very soon we began performing again in directors’ fragments of students. After NATFA we split again, but soon Anton brought us together, then Marius did it too. After few years she joined the National Theatre as well. I have watched all of her performances and she has seen all of mine. Everybody in the theatre knows about this long theatrical relationship between us.

When I joined the National Theatre in 2001, I was still a student and Radena was the first person I got to know. She was older than me and she was already a prominent actress with great roles. I don’t know how that happened, but we got close. This acquaintance has grown into a great friendship that continues to this day. She has always been my strict observer of everything I do in the theatre. She has always given me advice and opinion. There was a period, a long time ago, when we went to techno parties together. We danced all nights. We were going and having fun. We travelled together on tours, and again – the two of us strolling for miles only to see everything. Moscow and Saint Petersburg were cities of scale and distances, unmanageable to the human feet, but these distances didn’t frighten us. Yes, we were rewarded with some corns, but we happily went on. We have performed many times together and have great memories of these moments. In the last two years we have made together with her three consecutive and important performances for the Bulgarian theatre. Radena is one of those people to whom I say everything on my mind. And when something bothers me and she is before me, she gets the heat, patiently listening to my problem and trying to help me with advice.

I saw Julian Vergov for the first time in the production “Hamlet” by Lilia Abadjieva at “Salza & Smyah” Theatre in 2001. He replaced an actor and I didn’t even know he was performing. There was some blonde guy on the stage, looking pretty good, like a Western actor, and this disturbed me a little. It disturbed me because he was a potential competitor. But when I saw how he performed, I relaxed because I didn’t like him at all. He was screaming, trying too hard. I said to myself, “Yes, he is a cool guy, but not good as an actor, he can’t compete with me”. I was relieved, but it stuck in my head. The next day, I started asking around about him – who he is, what he is, and so on. It turned out that he has studied at the Theatre College “Luben Groys”. Then I forgot about him. At that time, the National Theatre made a casting for young actors. I saw him again at the casting. Julian passed every round. Finally, it turned out that after the casting they’ll take Julian and me. Then for the first time I began to rehearse with him in “Romeo and Juliet”. Since then to this day, we are close and we are trying to get through life by helping each other.

The connecting link of this group is me. But if the people didn’t like each other and fit well, a link like me wouldn’t help. This friendship is above all the work of fate and life. To these two things, we humans are insignificant and our efforts would be small. And a person cannot escape his fate. And this production is the living proof. When you come to the theatre for “God of Carnage”, keep in mind that you will watch four very close people performing under the direction of a friend. The cycle has closed.

The photos are taken during rehearsals and tours of the production.