This girl is 29 years old. She will surprise you with her courage and strength. Besides her successful career, she struggles with anoteasy fate that life has sent her. A serious test that requires a strong mentality. She does not grumble! I have never heard her do it. She has accepted the facts and she lives with them, and then some. Vicky Radoslavova is one of the best young editingdirectors. She is so good that everyone wants to work with her because it is a guarantee of a very good end product in the filmmaking. I will tell you about her, and about her successful realisation, I will also tell you about her battle. I did not want to write about the latter, but I realised that the purpose of these texts and the presentation of these people is to motivate others, but not just professionally. Her story will give you faith and will show you how we should look at life with optimism and a smile, even if we do not feel for it.

I had heard about Vicky a long time ago, but we met around“Devil’s Throat”, a series she worked on with great love. Evtim Miloshev had invited her to Pamporovo to assemble roughly the filmed scenes of the day, so the director and the producer are sure that things are working out. I am not sure if you know that actors want very much to watch the shot material. It is not very good, but it is a fact. So everyone learned that Vicky was in the hotel, hiding. I only heard about it, but I didnot see her. The raids of those wishing to watch the footage grew with each passing day so she left. I heard again about her work from Evtim, who told me months before the series aired that Vicky was doing miracles. Since a long time had passed after the shooting, then a very long time of editing and preparation, our curiosity grew, and one day Teodora and I decided to go to the editing room and watch a little. Vicky was in heaven that finally, after months of lonely editing, the people who she hadwatched all day on the screen would come to life and watch the end result. She was like a little kid who wanted to show her guests everything she was proud of, everything that turned out well. She was saying“just wait to show you the scene with Slavcho and Philip from the 3rdepisode, just wait for the scene with Mia and her daughter, and wait, I want you to see the scene in the woods, and the finales too…”About six hour passed like that, with a bottle of whiskey and snacks from thegas station. I remember that at the end I was crying, I got ashamed of the two ladies but a wave of huge emotion flooded me. And then I realized why this girl is so good. Besides her undoubted talent, she does everything with big love. Very big. She loved the project, the characters, the script. She had thought for weeks how better to tie things together, to bring out the character’s qualities. She lived with Mia, Philip, Asen, Popeto, Krasi, Donka and Slavcho for almost a year before you saw them. It is so important to truly love what we do. Only then the good things happen well, only then everything is real.

Vicky is from Silistra. She grew up in this beautiful city around the river. School was boring for her. The literature teacher Mrs. Vanya Ignatova suggested her to edit pieces of films and to assemble them in various other stories related to the studiedworks. To make works like “Golemanov” more digestible and interesting. She liked it and started doing it with ease. At that time she also trained judo. She reached peaks in this sport, but the time to think of a serious profession had come,and the sport was no longer so interesting. After graduating from high school, she wondered what to do next. And, naturally, she quickly turned to NATFA and “Film Editing” there. She was admittedimmediately, and here life in Silistra ended. The suitcases were packed and the next stage began with full force.In the academy, her professor Assoc. Prof. Dr. Nina Altaparmakova quickly noticed her potential.After the first year, she took her as an editingassistant in “Undercover” – the most popular series at the time. Vicky quickly dived into the deep and not long after thatshe got her first individual series “KantoraMitrani”. Years followed when the days started to merge for her–classes at NATFA, editing of big series and films. The series “Tree of Life”, “Sofia Residents in Excess”, in total 10 series and over 130 episodes. The films “Corpse Collector”, “Voevoda”, “Hristo”… She also went to Portugal and made a short film with a local female director.

She has worked with most of the Bulgarian directors and producers. They love her and appreciate her not only for her qualities, but also for the type of person she is, and the way she gives a lot. People who work with such fire are rare. For her, the next project is not just the next job, for her it is everything, and she goes through it in full force, exhausting and giving it a lot. Currently sheteaches courses on editing at”Creators” Association, she also teaches at NBU. She meets young people who want to become good at editing. If you have such impulses, try it. She is a very good teacher.

Along with her creative life, Vicky is also battling a serious disease – endometriosis. She was diagnosed when she was 24 years old. I will not go into detail, but I will tell you how she handles it. This disease causes violentpains in the body that last for several days and recur every month. So violent that very often sheends upin a hospital where they try to control the situation. The pains do not ask her where she is, is it convenientin the moment. They stormstraight away without caring about anything. How do you live with that? For a long timeshe hid her problemfrom everyone. Each time she hada crisis or hospitalization, she told the people she worked with that she had contracted a severe virus and she hada fever and could not work for several days. She did it for many years, but finally she gottired of this secret and publiclyannounced her companion – the disease. It was also the first step in a complex philosophical process of accepting, getting used to, and eliminating fear.After this confession, she learned about many women with the same disease and realised how important it is to talk, to see that you are not alone and the only one, and that there are other people who battle it and succeed. She was telling me how she got terrified of the next crisis. That was the only thing in her thoughts, and those thoughts were ruining her. It is a disease with no cure. The only thing she can do is get to know the disease and become friends with it. As much as possible. Over the past years, she was always pitying herself. She had looked for reasons why this was happening to her. But she realised that there are also many good things in her life and instead of fixing on the negative ones, she will turn her thoughts to the positive ones. To her work, to her beloved dog, to her friends, to her motorcycle. Her problems are the other side of life, but who does not have problems? We all have, the important thing is how we deal with them.

I thought a lot about her story, and about myself too. How important it is to readjust and to see the good and the positive. I think that a person is basically created to see the bad and the negative. It is very easy. The hard part is to see the good, and it exists. For everyone, it may be slightly hidden, it may not be visible at first glance, but it exists. We just have to find it and cherish it, to become visible and big. Some time ago, a diary was introduced to me. Each day you have to write in it about 15 things that have impressed you positively, the good things you have done, and the nice things to remember from that day. For two weeks I looked at this diary and could not point out a single positive thing. Finally, I started to look for and provoke the positive. The process is difficult, but it is the path to harmony.

The last thing she told me (she has told the story in her blog that i highly reccomend)is about a dream concert she attended with her sister. The excitement was enormous, the joy too, and right in the middle of the concert the disease appeared and as if it told her “no, you will not enjoy this concert”. The unbelievable pains started, medical team took her to a tent, infusions, medications, half-consciousness, but in all this fuss, she was happy, because though like that, she was still listening live, somewhere in the distance, to her beloved band. This is a huge example for me. An example that even in our most difficult times we can find the good. 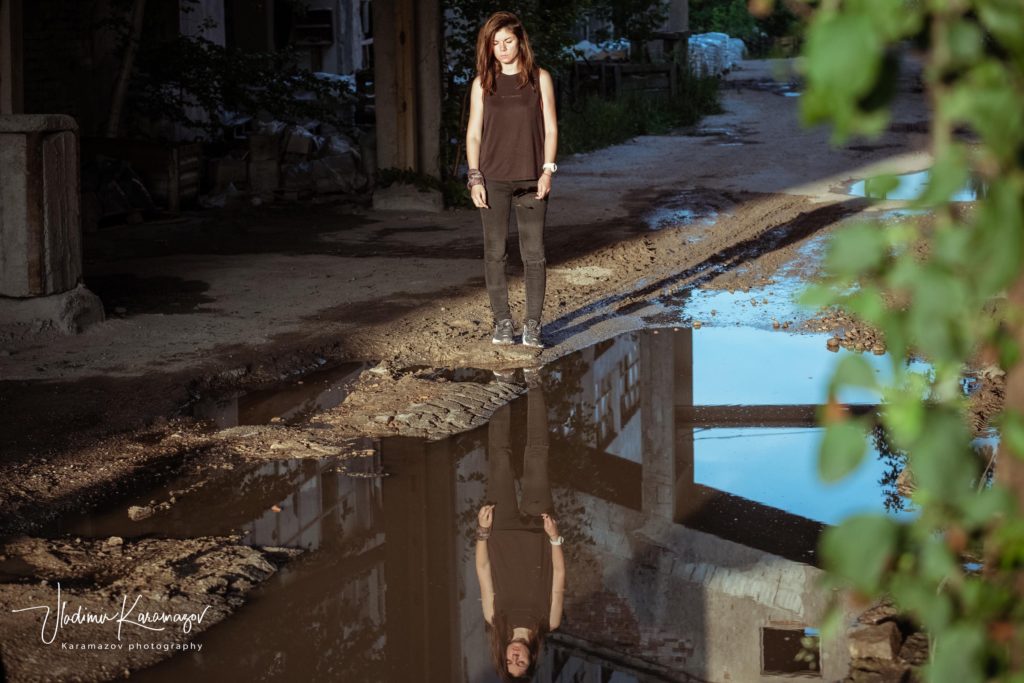 Finally, I will tell you about ananalogy I did. I was on a trip through the towns on the Danube River and I reached Silistra. There I thought of Vicky. I stared at the river.The power and the size of the river have settled in this little girl, because despite Vicky’s pocket size, she is as strong and as big as very few people can be. As strong and as big as the rivershe grew up around. I wish everyone to find the good and the positive in their lives, despite the problems we all have.