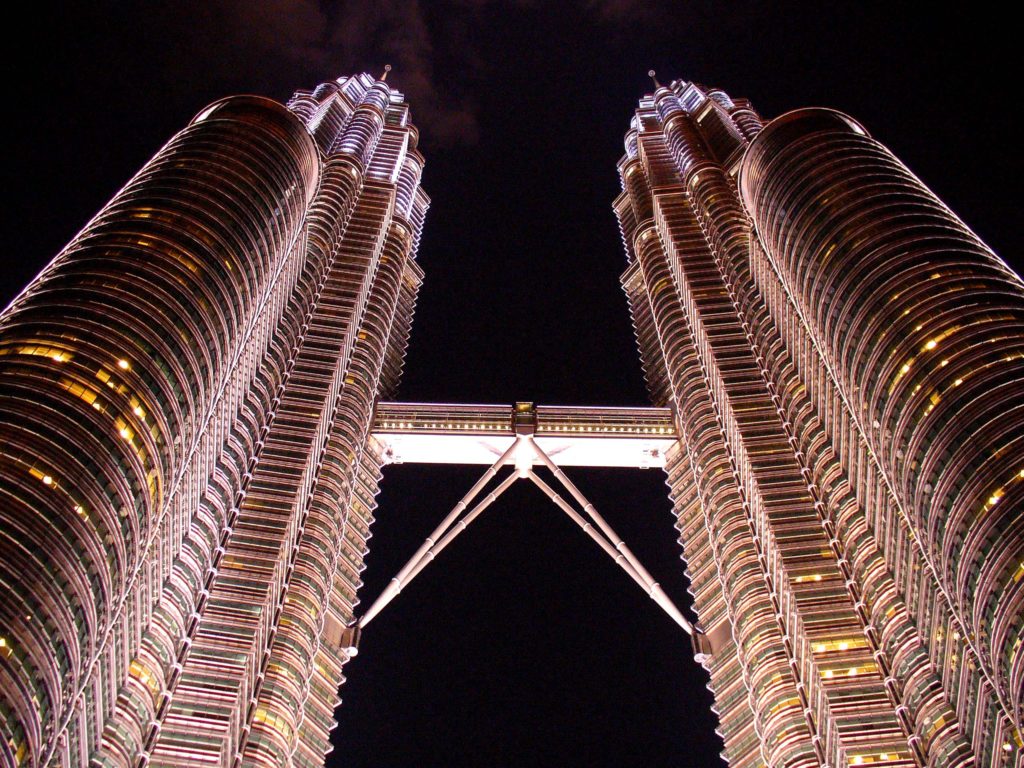 The next morning Yavor and Lak accompanied me to my new hotel, I left my luggage there and in turn I saw them to their leaving. I remained alone in Kuala Lumpur. Now I could do whatever I want. I had already drawn a plan from Sofia, with numbers on the places to visit. On a sheet of paper I had a very diligent and beautiful tourist programme, each number had a photo of the place. So number 1 was a thorough visit to the towers and a climb to the Sky Bridge. Interesting, but every day my programme ended with a visit to … the street with the fakes! I headed for the towers. You absolutely have to see them. Remarkable architecture. They have been the main character in many film productions. When you see them close by, you will know why they appear in all travel books around the world. The bad thing is that the queue for an elevator ticket is huge and you’ll have to wait 2-3 hours. This bridge is on the 42nd floor. It’s very frustrating, and if you haven’t climbed something like that, I don’t think you should do it. 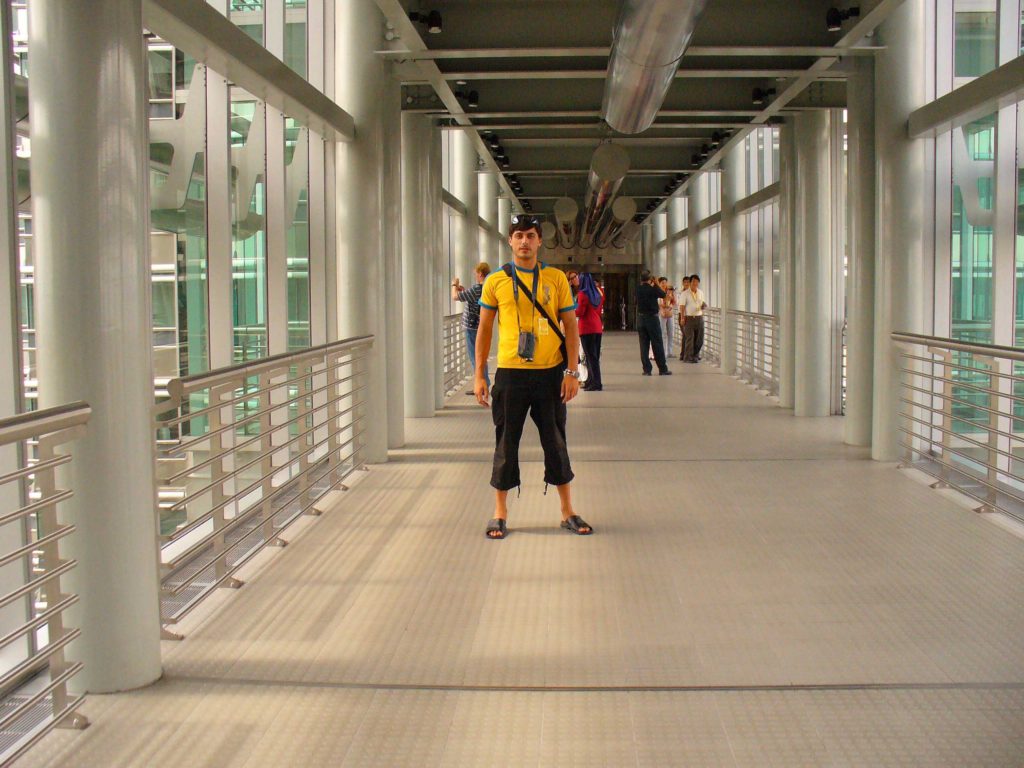 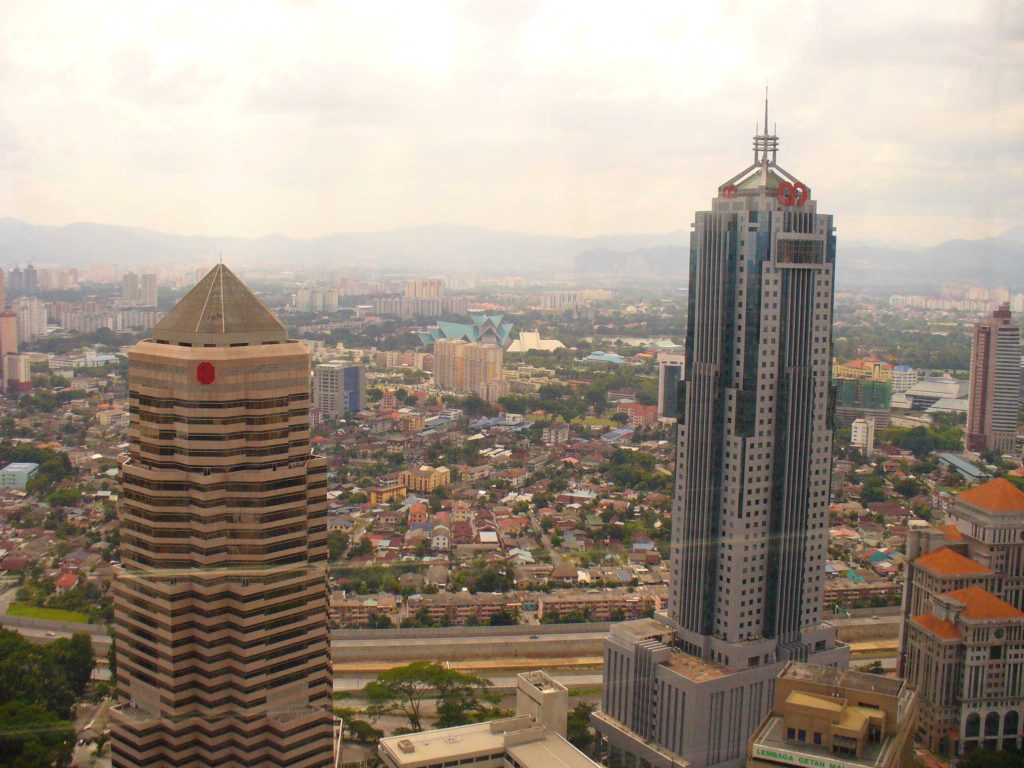 Yes, it’s nice because you see the city from above, but the stay on the bridge itself is 3 minutes long and on the dot, because the next group of cattle is waiting. They also treat you a bit like a sheep. You enter the elevator like a sheep, then you look like one too (in 3 minutes you snap 10 photos and the time is over), and so you go. On the photos I publish here you can see what it is and I think it will be enough for you. Then on leaving you pass by the tower museum. Here they tell you how the towers are built. They were created by two completely independent teams and there was constant competition and chase. Finally, one team ended their tower a week faster. There is also a huge Shopping Mall in the towers. For the people who want to buy something branded, this is the place. And for those who want to buy something quality branded, but slightly fake – you already know where. And so, to number 2 on my list – a cafe with a lot of photos of it posted on the internet. I loved the great view of the cafe and the towers behind it. But I didn’t know at all where it was. I decided to ask a taxi driver because I supposed the cafe was well-known since they had photographed it so much. But no – it turned out noone knew it. I’m stubborn and had to realize my programme at 100%. Here maybe you’ll find out what kind of a person I am! I don’t quit easily and I’m ready for anything to achieve my goal. I took a good look at the photo I had, and particularly at the angles of the towers. From the photo I assumed the cafe should be on the other side of the towers, not the one I am on. I noticed also the scale in regards to the cafe. They were pretty small compared to the cafe. This means one thing – it’s a long way to there. I started walking and I constantly looked at the photo. No, they’re still big – so it’s further. No, they are not visible here. No, here one tower hides the other. And after a few hours of going about in 6-7 km range, I saw the Saloma bistro. I came to the same place where the photo from the Internet was taken.I felt enjoyment literary to the point of madness. 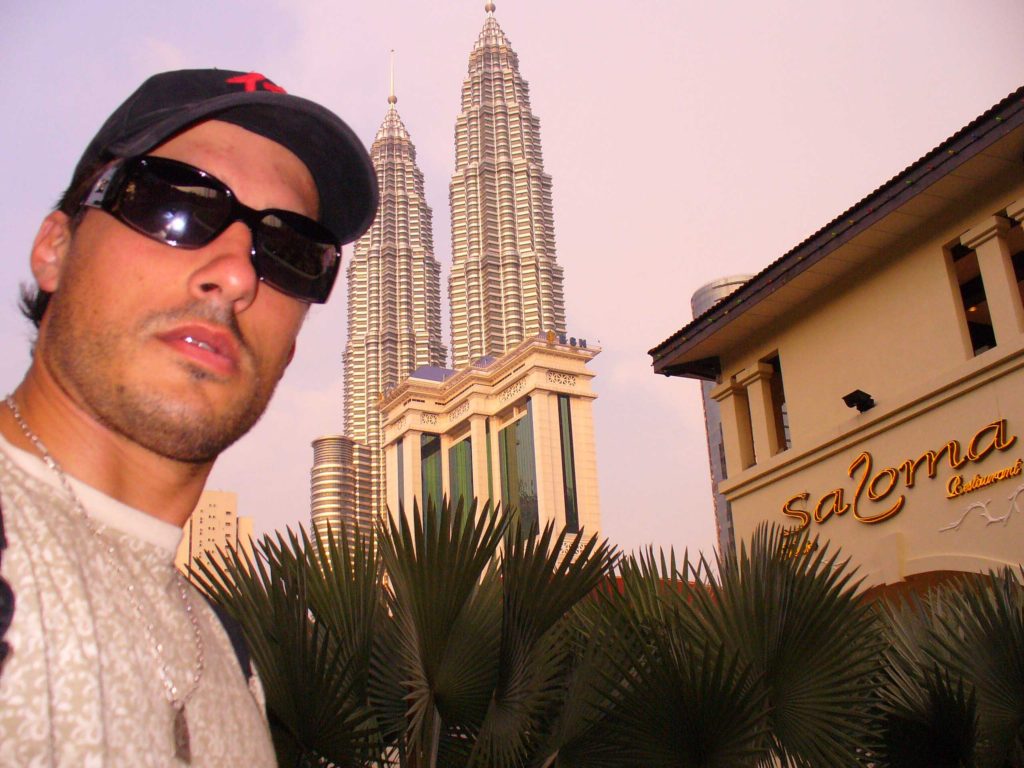 When you’re abroad and you don’t know the city, something like this really makes you feel very proud of yourself. It’s as if you’ve conquered a territory as an old sea explorer. I was all sweaty (42°C and 100% humidity). I went into the bistro and had two beers as the sweetest thing. When I rested, it was already at dusk. I decided to pass by the towers again to shoot them in the dark because they were exceptionally well lit, and then on – to my favourite street for a little bit of haggling. I came back to the hotel late with a few bags. I think I had bargained a sweatshirt for me, watches for Zachary and Julian and one for my dad. Some discs with movies I’ve been looking for quite some time in Bulgaria. Scarf for my mother. Purses seemed also nice, so I got one for Julian. I’ve no idea how and why, but it seemed to me that all those people I was buying for would be bloody happy and impressed with the gifts. I was 100% sure that I was looking through their eyes and that I liked these things as much as they would like them. That’s why everything seemed a great and very suitable gift for them. Оoo, a fake of a branded bag for my mother. After a steady bargain, a real quarrel with the seller, I bought it. So the bags were quite many. I fell asleep at once. 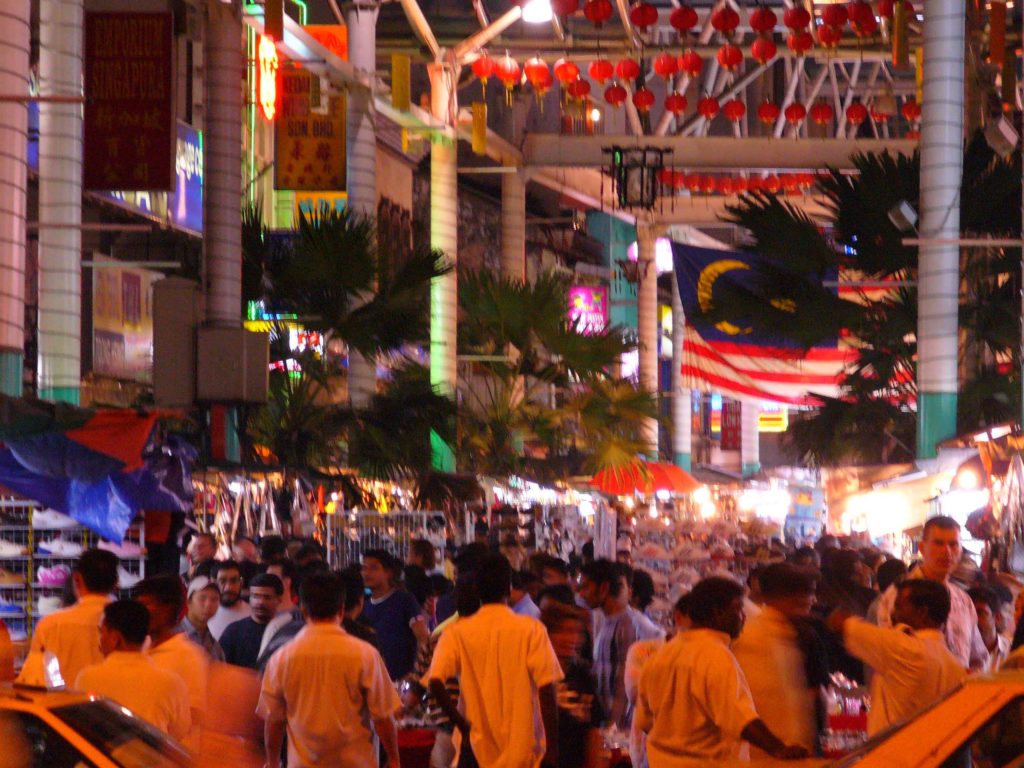 The programme for this day included a visit to Batu Caves. A cave, which is 13 km away from the outskirts of the city and can be reached by a bus. Always before I leave, I consulted with the guy at the front desk, and he was somewhat helpful by giving me information on where to get the bus, how much it cost, and so on. I quickly found my bus because, with large letters in front, it said “To the Cave”. When I got there, I read on a sign that I had to climb 242 steps. Thank God there were not many tourists. I started climbing and finally, for the sweat I had poured on the way, I was rewarded. There was a view of the city, but much nicer than the one from Sky Bridge. You should absolutely visit this place. I spent the whole day there. The cave is very large and beautiful, and on certain days of the year many rituals and festivals are organized there. If you are lucky, you can hit upon them. 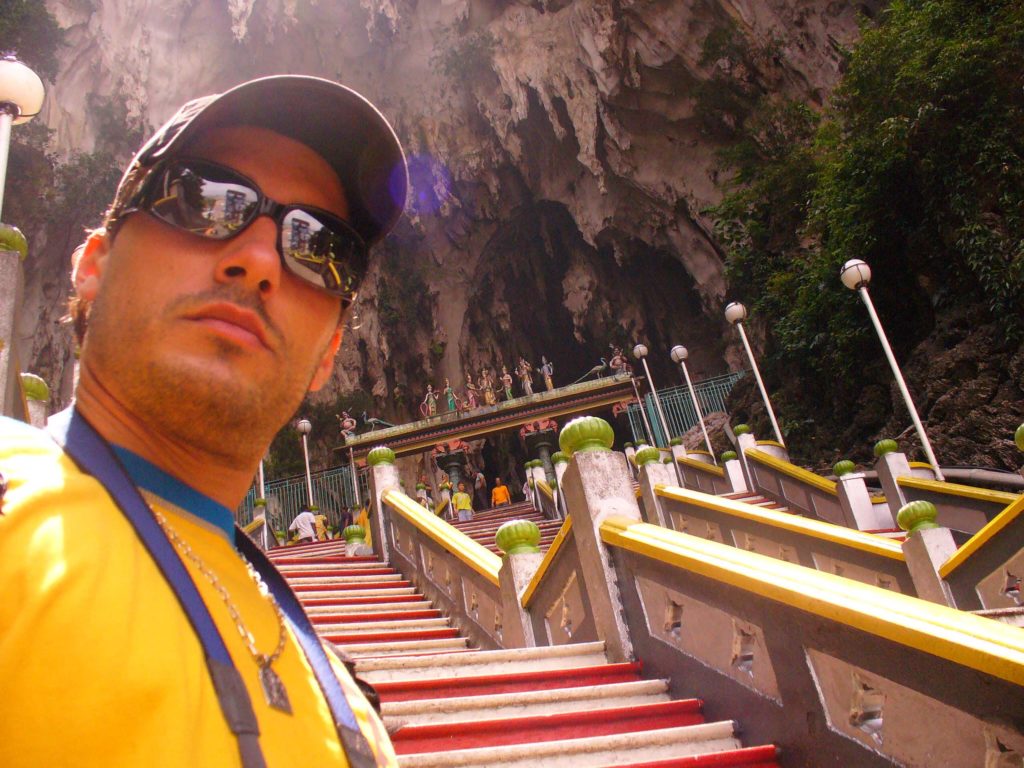 I was already tired, but the day could not end without a bit of what? – bargaining, just for fun, getting the next number of gifts, guaranteeing a good sleep from the pleasure of outwitting the sellers. On the way back in the bus I recalled what I liked the day before, for what I hadn’t managed to bargain and for what the seller was firm. I was just getting ready for the third round of gipsy business. Everything from the previous night was repeated, the new thing was that now I liked a picture made of wire – TACKY. Well, it looked interesting, and it seemed to carry some spirit of Asia. At first glance I didn’t like it, then, at second, I was seeing a spirit of Asia. Well, yes, some things happen like that. I liked it even more when the seller got stubborn and didn’t want to take a penny off the price. I thought it’s probably very valuable if he’s so stuck on the price. I gave up and left, supposedly. There is a trick. Seeing that he doesn’t lower the price, you say to him that you’re giving up and leave resolutely. In 80% of cases they stop you for fear of losing you as a client and agree to your price. Yes, but now I left and noone stopped me. Well, I screwed up. I reached the corner of the street, stopped and decided another tactics. I get the money out and show it to him, of course it is less than his price and I convince him I don’t have more. No, that didn’t work either. I guess I screwed up and the seller saw in my eyes the initial dislike of the wire picture and the process of seeing the spirit of Asia. And he knows I want it. Finally, I took the picture at a slightly lower price than the original one, but I have a picture of the incarnate spirit of Asia. I fell asleep more satisfied, and I had a lot more presents around me in the room, but tonight they were my trophies. I was going to sleep in a sea of ​​bargained goods. Now, from the distance of time, looking at this so-called picture, I just see it real tacky and cheap and I don’t see the spirit of Asia anymore. All the magic was lost when years later I was accidentally at Iliyantsi market, and there I saw the painting with the Spirit of Asia for sale. I’m nothing short of desperate for my excitement when I’m somewhere far from home and my brain works in some strange way. 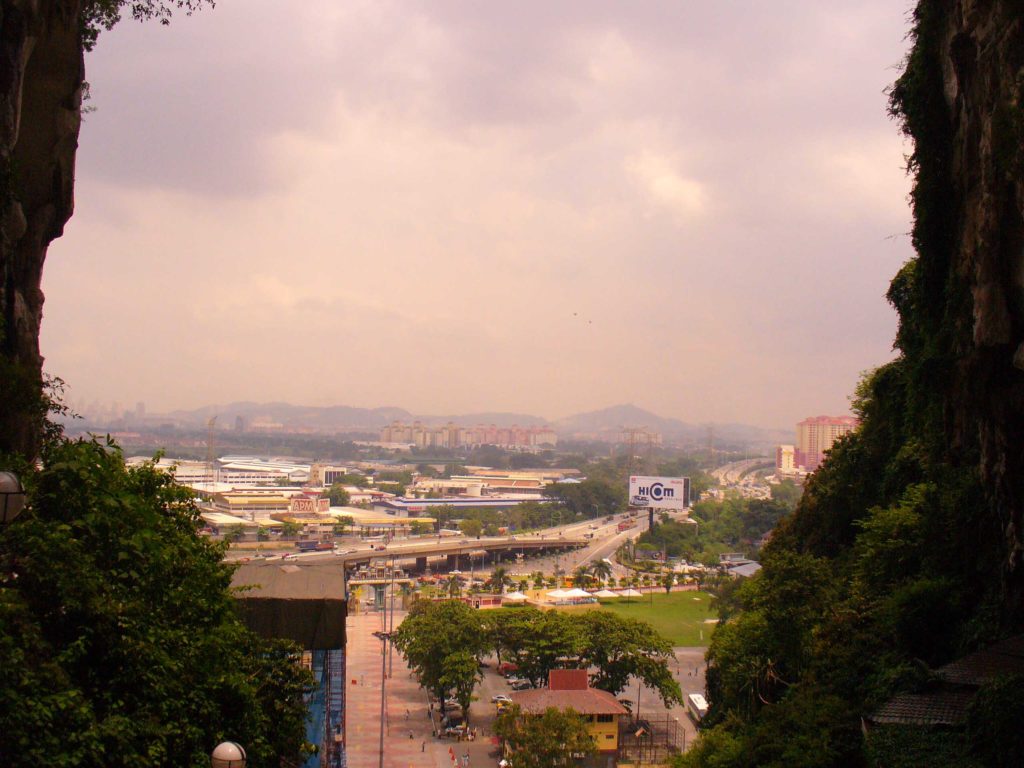