Ever since I remember I was always loaded with photos and ever since I remember I’ve harassed my friends to shoot them. I want to tell you how this obsession with photography came to, the road I passed, and why I like doing it so much. I will tell you about all my cameras and about the time they have faithfully served me. If you mention a word about shooting, my family will get sick because they have been subject to many years of intense photo harassment on my part. Ever since I was little I remember that my father was very keen and shooting. Thanks to this, my family now has great photographed memories. He had learned to develop the photos himself and made an improvised photo studio in an old workshop. He allowed me and my brother to enter this workshop while doing the magic of developing the photos. He gave us a pair of tweezers to shake the paper in the bowl with the chemical, as the image on it slowly started to appear. As it showed completely, we were quite euphoric and shouting “look at it – grandmother”, “look at us here with the balls”. This is a very bright and very nice childhood memory. When my father gave up, it was sad, and I even remember hiding the camera he had thrown away. I keep it to this day. It is a family relic because it is the little machine that has perpetuated memorable moments. It is a very valuable item for me and I will keep it forever.

Then there was a period when neither I nor anyone around me was shooting. My brother went to Dubai to work there and told me he would buy a very modern camera – digital. This camera had the function of viewing the image immediately on a display. Then you can just as easily download the photos without developing, directly to the computer. I could not believe what he was talking about, and it seemed to me just like a movie of the future. I even dreamed about it and imagined it to be really like a space ship. He would bring it on a summer vacation of his. What a waiting it was, what impatience. Ivan came back and handed me the box. It took me a very long time to get used to this miracle and to accept it as normal. I just didn’t stop shooting. I didn’t stop. This camera – Kodak EasyShare CX6200 – was all the time with me from 2001 to 2005. With it I shot my first years in the National Theatre, the first moments of my friendship with many people, the first trips abroad and tours around the world. I’m glad to keep it, though now it looks like a lifeless soap dish. It all started with it.

In 2005 I decided to take the next step in photography. I didn’t have much money, but I started saving. The new Panasonic models with Leika lenses had come out. I focused on Panasonic Lumix DMC-LZ2. I was crazy about it. I think I gave so much money for it as I couldn’t imagine at the time.

But that’s exactly why it was so valuable. I admired the technology progress. It was really a cosmos. Yet at that time I was suffering by the fact that I was shooting only on automatic, I didn’t know anything about the technical part of photography. At the same time, I participated in a lot of photo sessions for magazines and commercials with the big Bulgarian photographers. When they took good shots, I was clicking my tongue for weeks for their talent and the knowledge they had to organize such footage. Pavel Chervenkov is one of the good ones, he has really blown my mind with his photos. Talent, capable of organizing and taking the perfect shot. He knows a lot about the light and he is a person with great aesthetic criteria. The other one is Dragomir Spasov. I shot with him in all his diploma theses at the National Academy of Theatre and Film Arts. He is more crazy and obsessed with beauty. He wants the frame to have beauty in it. He strives for it even if it costs him dearly. I remember he has ordered the whole new Victoria’s Secret underwear collection. He invited our most beautiful models and made an impressive photo session. So, I have always had that striving to seal the beauty of the moment. And, namely, the beauty you see through your eyes. Beauty is different for everyone. Probably because we have different filters through which we look at life. And I think the good photographers are the ones that have the beauty seen through their eyes liked by hundreds of people. I spent many years with this camera. With it I shot the best summers, most trips to Asia, the first Survivors, many work moments.

In 2008 I had more money and I decided to pamper myself and buy the hit Olympus Mju 1030SW. It was a hit because this camera shot very well both out of the water and in the water. It could shoot at 20 meters depth and withstand shocks and drops. It was in different colours and one of them was my favourite – green. The best green.

I bought it and I melted down. With it I shot the first underwater photos at the Black Sea coast, in Panama and in Greece. But in Greece I dived at depth more than 20 meters and it broke down. It didn’t survive the pressure and filled with water. When I got out, I wanted to cry out loud (later in the years I have cried for a camera but more about that further on), but there were many people around me and I managed to hold back my emotions. But that doesn’t mean I didn’t take it to heart. On the contrary. It was dramatic. I could not forgive myself for the stupidity that I took it with me on this dive, knowing that we would go down at depth more than 20 meters. As I was writing this text, I remembered my green little machine and sat down to find it on Ebay. I bought it used, but working, I’ll use its mechanism with my box and it will probably work again in 10 years. 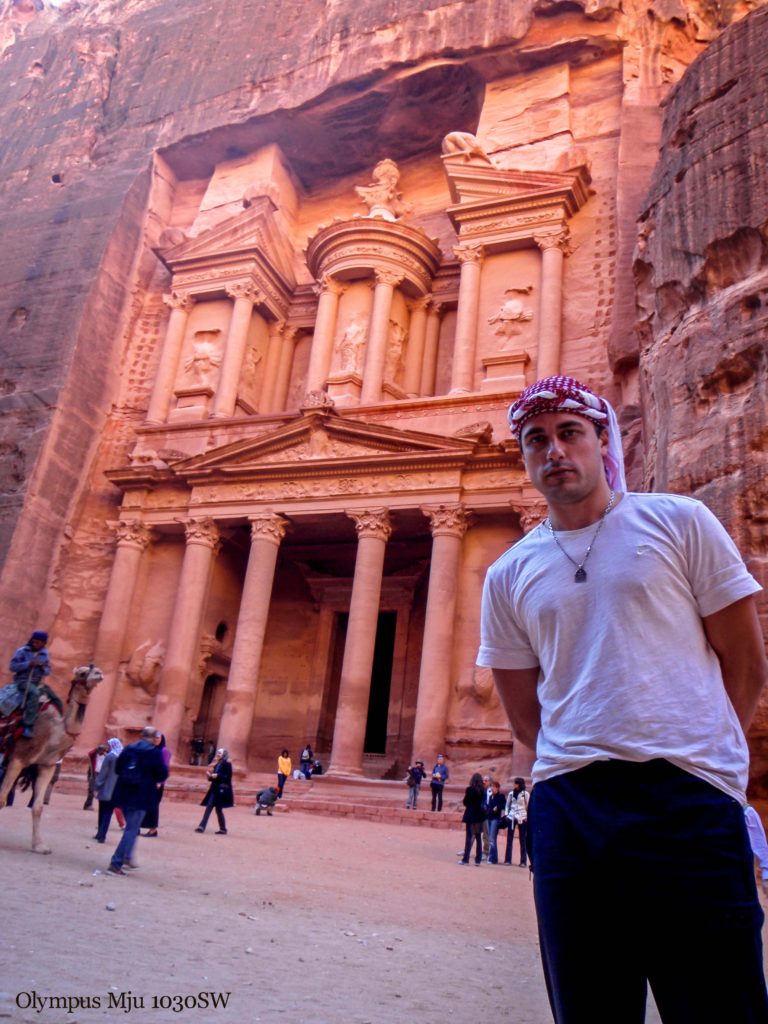 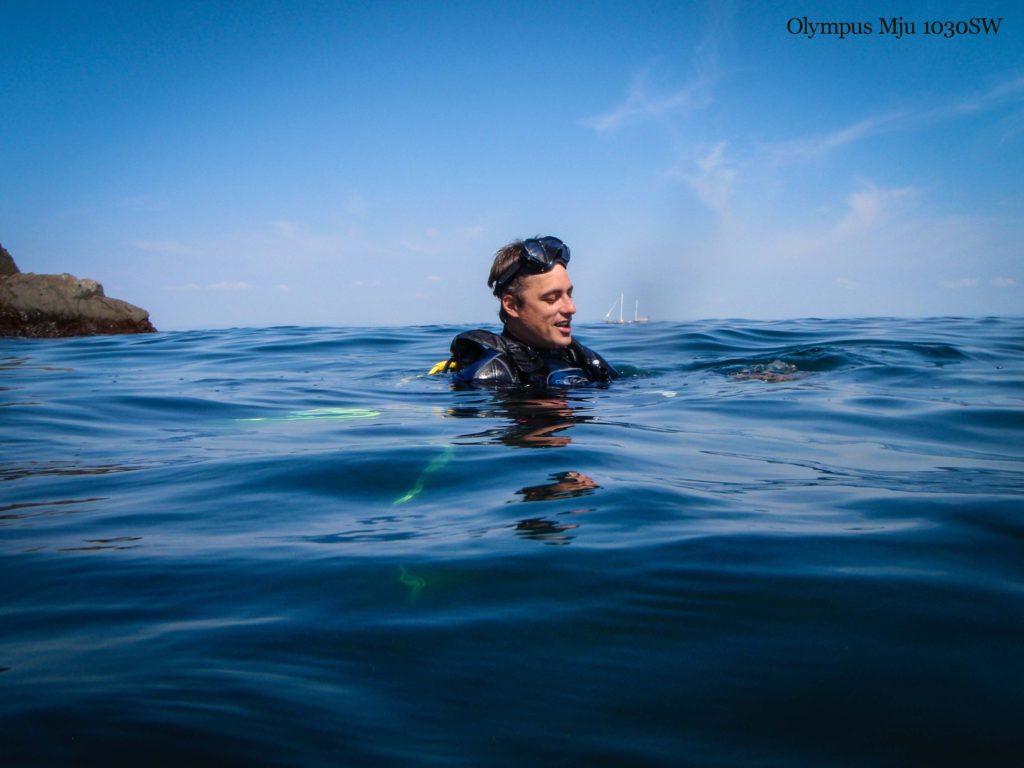 After the sad ending of the little green submariner, the next step in photography came. It was the completely underwater camera designed for deep photography – SeaLife DC800. I bought it before an upcoming trip to France, where I would stay for a month at the Avignon Festival, and I would go to Marseilles every day to dive at their biggest diving centre. I and this camera didn’t get along well together. It was too high ball for me. It had also an external flash, and it had to be tuned according to the depth, and so on.

When I dive, I get euphoric with the other world, and all the techniques are left behind. This camera with this big flash was rather an obstacle than useful to me. I really could not take nice photos with it. I was looking on internet at very good quality photos with this model, but I didn’t manage to create them. When I was on diving tourism in the Seychelles, I fell into the water from the boat and I had it with me but the flash cap was not closed. The flash died. The only thing left was the camera, but without the flash under water it’s nothing. I tried to find a flash, but I could not. And it was retired in its very nice bag. I shot with it from 2010 to 2012. 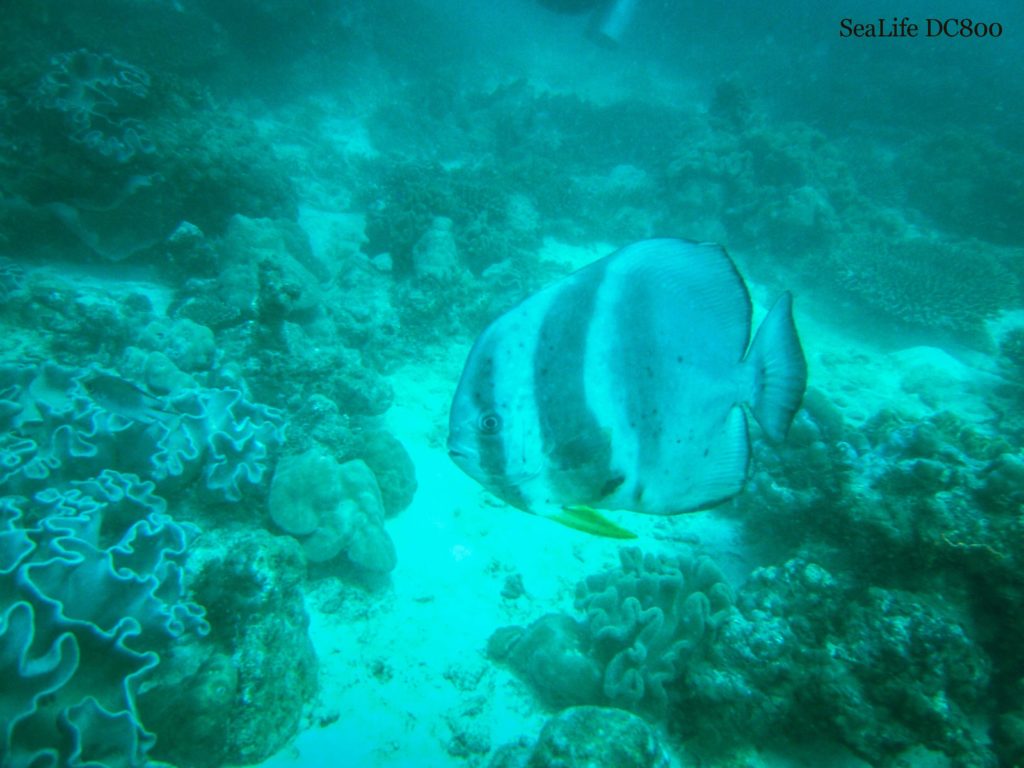 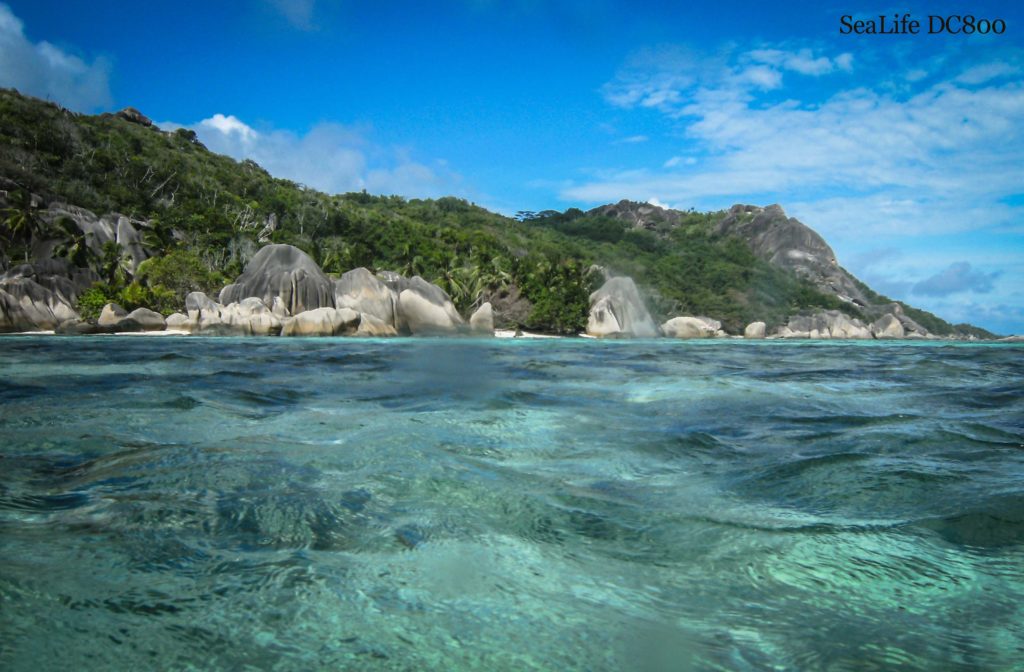 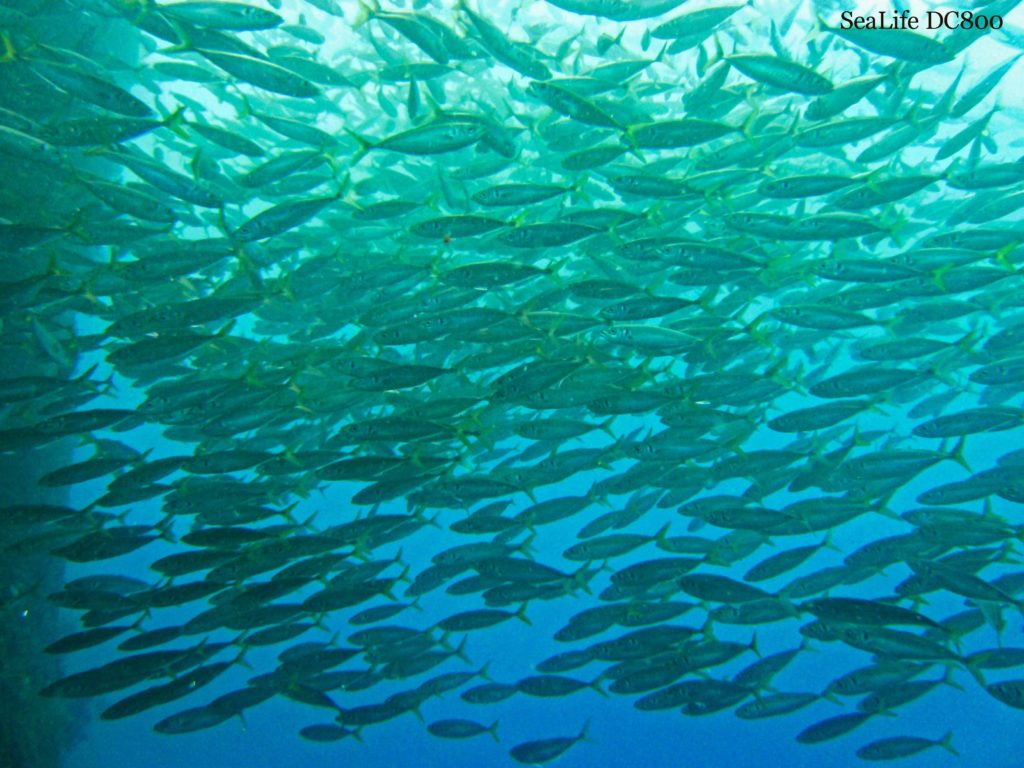 Then followed a period of cell phones. They shot well and it was easy. But I quickly realized that I didn’t want to shoot with a cell phone. The next research has started. This time Pavel Chervenkov recommended me Panasonic LX 100.

It was a real jewel. It shot great in both light and dark. It was taking great photos and I was very glad. It was constantly in my backpack. With this camera I shot the whole tour of “Three Bears” in 61 towns across Bulgaria and the filming of the “Devil’s Throat” in 2017.

On one of the last trips of the tour, I invented a very good shot at a gas station. It had to be from a tripod, but a wind was blowing. Obsessed to get the shot, I ignored the circumstances. The wind knocked down the tripod, and the camera crashed into the asphalt on its lens. It broke, and we had two more towns left. I was like robbed, I felt very bad, and I started crying of hysteria and nerves. Quietly, but my colleagues noticed it. After that I suffered lots of mockery, and after a while I rehearsed a play in which my character had his cell phone dropped into a vase with water and he cried. I already knew what that feeling was and it was not difficult for me to recreate it. Thanks to the people I bought it from, I got a new one and the photos continued. But it was during the filming of the “Devil’s Throat” that I began to get nervous if I invent a frame and I can’t shoot it, if I travel and see a place for a great photo but I can’t stop to take it, if I can’t take the photo immediately because I work and the light is slipping away. I’ve run like an idiot just to catch a frame. Fortunately, one of the directors of the series was crazy about photographic equipment. Everything he earns he invests in cameras and lenses. And then, with him, the thoughts in my head cleared up. I wanted to go to a more professional level and get really good equipment.

Pavel Vesnakov – the director, told me about the best one in his opinion. I started researching and soon I had Fujifilm X-T2. My passion.

It took me months watching youtube videos to learn how it shoots, to learn its functions. The first photos were 90% waste. It’s a tough camera that shoots mechanically. It has automatic functions, but I don’t touch them. I started to get lenses as well. I became like Uncle Mancho – the photographer. But the difference from previous years was that this time I won over the trust of my friends with the photos I take and they pose for me without any problem. Even some of them immediately pose for a photo when they see the camera. I wanted to learn because this is the only way I can create places in the Internet space to my taste and with my views. One way to do this is through my photos. The site is one such place. I needed just this so the site will be nice, complete and interesting. Well, now I put there everything new that I do. I have a ranking of my best photos so far, for which I post a link for you to see them. 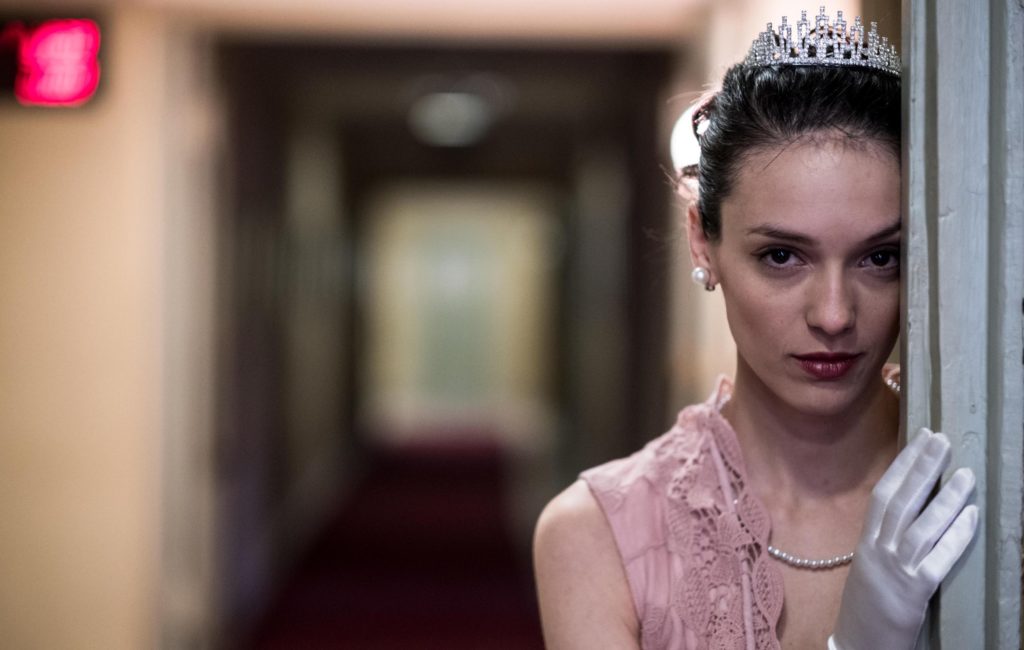 That’s all for now. Which is the next step in photography, I have no idea. I hope it will be big and constructive, but till then I’ll show you here and there something that has turned out good and that I’m not ashamed of. I thought of a hashtag #Karamazovfoto (with a slight bug since there is no such word in English – Foto), with it you can see the photos I have taken. If this hashtag appears more often, it will be a clear sign that good photographs are being born.