The pursuit of perfection! Whoever follows this path will have a difficult life. He will be tormented, despairing, depressed. He will very rarely recognize his own success, because it will never be enough. Not everyone goes along this path, not everyone realizes what this is. Only few need perfection. The pursuers of this utopia are cranks and people with restless spirit, grumbling and demanding. Their life is hard. They have not chosen this path by themselves, it is a given, they are like that and no one can change them. What is certain is that these people have the opportunity to achieve very serious results, to reach their perfection and the peaks in their field, peaks that everyone dreams of. They go through life in full force, in real and squeeze it out. The only thing that can fail them is themselves. I will tell you about such a man. There are such people and they are among us. Their geographic location cannot stop them. They exist and maybe they are not just a few. They have not hidden, on the contrary – they work in the open, but the society knows nothing about them. And it should. Because they are significant and motivating. It was hard for me to persuade him to allow me to make this story. The character here does not want to be popular, he does not want fuss around him. What he does is not business (though he profits from it), it is rather his path to perfection. He has raised the bar very high and is constantly challenging himself. He works and works. He does not deal with side things like media appearances and displays, he is focused on what matters to him because the clock is ticking. He is the engine behind his POWHA Brand.

I will show you his face, but I will keep his name secret. So you will remember him by his work. By his clothes that are mastered to the smallest detail. The level this man works at is impressive, it is not Bulgarian one. People like him are only a few. I am certain of that! It all comes from the character and the manic mastering of the detail. It shows in everything. His work studio has an area of 1000 m2. Unique place in the industrial part of Sofia. It is done in a way that suits a man with a large mind. Equipment, colours, conveniences. There is lots of creativity in this vast space, it is everywhere. Cuts, drawings, designs, fabrics. As you enter the studio of POWHA (Instagram profile), you are definitely transferred elsewhere – to a place where most likely the great designers Lacroix, Galliano have worked. I will not use other names from the fashion world because he does not like the names that have turned everything into store clothing and business. If you do it, the pursuit of perfection evaporates and then comes the quick cut without thought, clothes that will be sold only for their brand and not for their quality. He likes Asian designers who are into niche fashion, working in their studios, manually producing every clothing with attention and respect for the detail. They make limited quantities, like paintings or small sculptures in the fine arts, which are single pieces. Naturally, such items are expensive and there is a reason for that. He often buys such unique clothes, to see them, touch them, and understand how they are made.

He does not care about the size, he does not want to wear them but to have them as the personified perfect work he pursuits. As young, he studies at the Music School where he masters the accordion. He is very good at this difficult instrument. Everything he hears he reproduces, adding his feelings, quite often with a sense of humour. And he makes his friends laugh. With the accordion, he has also achieved very good results, but he senses that this is not his path. Since then, he has not touched the instrument he has spent his teen years with. He has easily turned his back on areas in which he has evolved. But it is different with fashion. He starts in a rented apartment. He sews between the beds and his roommates. He quickly feels that he would be successful in sportswear for fitness and sports. He makes collections of men’s and women’s sportswear. He sells them in fitness centres and sports halls. The success is great. Athletes like his clothes. Business improves and he even hires seamstresses to keep up with the demand. But the 2008 crisis hits and everything fails. However, he does not give up. Hard years follow, but he uses them to consider the next development strategy. Together with a girlfriend of his creates the AryaSense women’s clothing brand.

Quality clothes at a normal price that most ladies can afford. At that time, online shopping is also introduced. The world opens, there are many places to sell on the global network. But there are also many people around the world who sell. You are no longer competing with several shops on “Vitosha” street in Sofia, for instance, but you are fighting with the whole world. He sell more and more, mainly to USA. Thus he starts to raise the quality of production, delivery, packaging. Things are improving and then some. Collection after collection, photo sessions of clothes, growth. The very good start is made, and comes the time of POWHA – men’s clothing made of expensive fabrics, comfortable and memorable. To be focused on his fashion, he has given up everything material in his everyday life. He lives in a stylish apartment that has almost nothing. Several items, two forks and two spoons, an armchair, and that seems to be it. He does not watch TV but reads books. He has no wardrobe, but a hanger with three sets of his clothing line, almost identical. When you ask him “How come?”, he says he does not need anything. If he buys something, it is for his work. I envy him for that. I may never stop getting new things, the thousands of perfect ones I have and want to have. How easy it would be to live without objects, without any extra things, how much air would be around you. But this is a level that few people reach. Me – probably never. This choice allows him to concentrate and focus on the detail of his clothes. Everything about them impresses.

The metal label you will never throw away, the lack of edges and labels that obstruct, the comfort of the clothes, the great feeling of the fabric, the elegant box… He often goes to fashion shows in Austria, where he has sworn fans who buy out everything he brings. His clothes are sold in Germany, England, USA, Canada, Russia, Australia… I cross fingers to see him soon among the biggest, to have exclusive boutiques in the big fashion capitals, to be such a perfectionist to his works. And most of all, after years of tiresome pursuit, to finally manage to reach his perfection, to calm down for a few days, and then go again. Where to would be his own decision. I am sure it will be big, just like his ambitions. 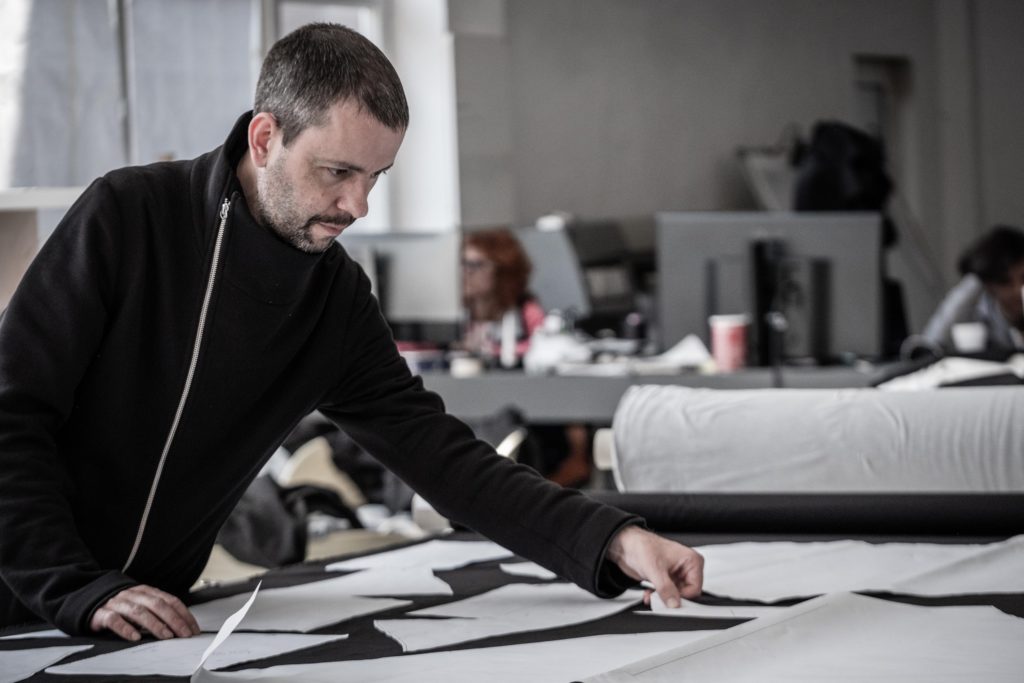