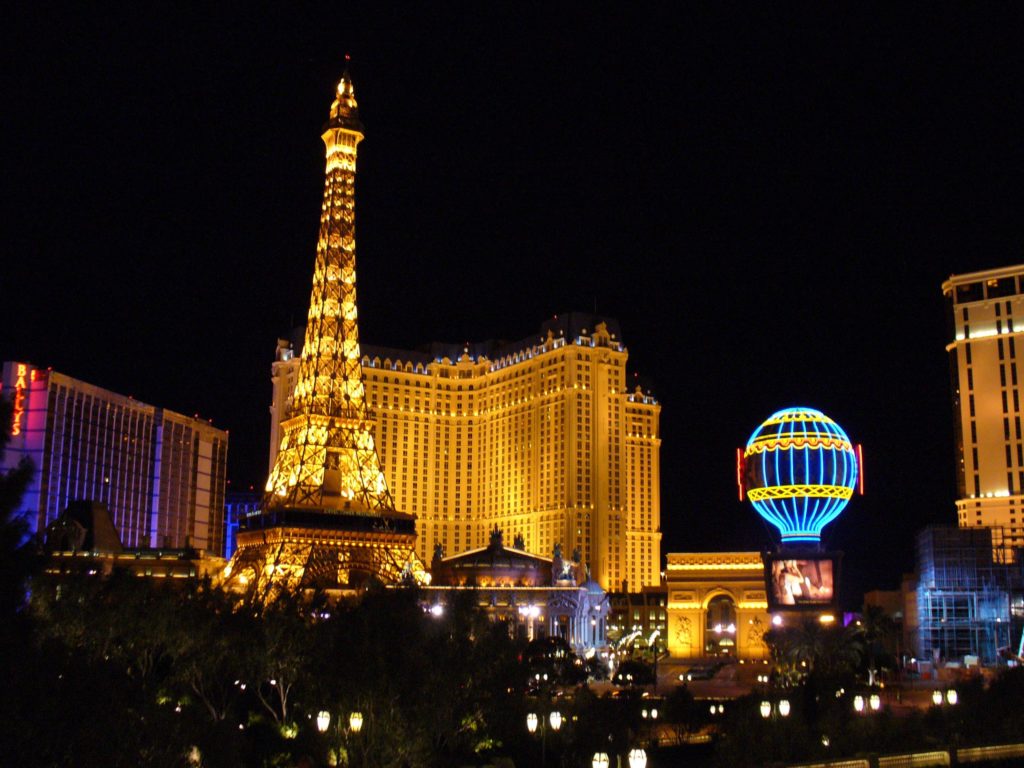 We stayed in the tallest hotel in the city – Stratosphere. The rooms were really huge. Again, with beds like huge double beds, but just for one person. We left the luggage and rushed out because we wanted very much to bet in a casino. In ten minutes we were already on the main Las Vegas Boulevard South. On its both sides there were famous casinos and hotels. We passed by the Treasure Islands Hotel and heard some noises. I saw a crowd, but this time I didn’t pay attention. I was so stunned by the lights and everything around me. Music started, and Julian said, “Well, Vladka, isn’t that the show Alexandra told you about?”. Naturally, I had almost given a headache to everybody with Alexandra’s story. I hear what Julian’s words, I turn around and I fall into Alexandra’s story, but this time live. Second great luck.

I wanted so much to see this show. We caught it right from the beginning. The story was not especially complex, the acting – not very good, even a little overacting. I say this now from the distance of time.Then, it was a unique, impressive pirates’ battle. The whole thing was done just to get to the moment with the sinking of one ship and the death of the main character. My two buddies were extremely bored and constantly repeating how dumb and pathetic it was, how flat the actors were, and they even left, while I watched it to the end by myself. I repeat, it wasn’t anything special. It was an advertisement for the hotel. Every big hotel had its own artistic gig to gather tourist interest. Bellagio had the fountains, the Venetian – gondolas, and Treasure Islands – this show. Nevertheless, I liked it and I was very impressed. Maybe not of the show itself, but because, again, I proved to myself that if you want something very much, it will happen sooner or later. I watched it to the end and just then I was relieved. I said to myself, “Well, Alexandra, I can imagine it now”. 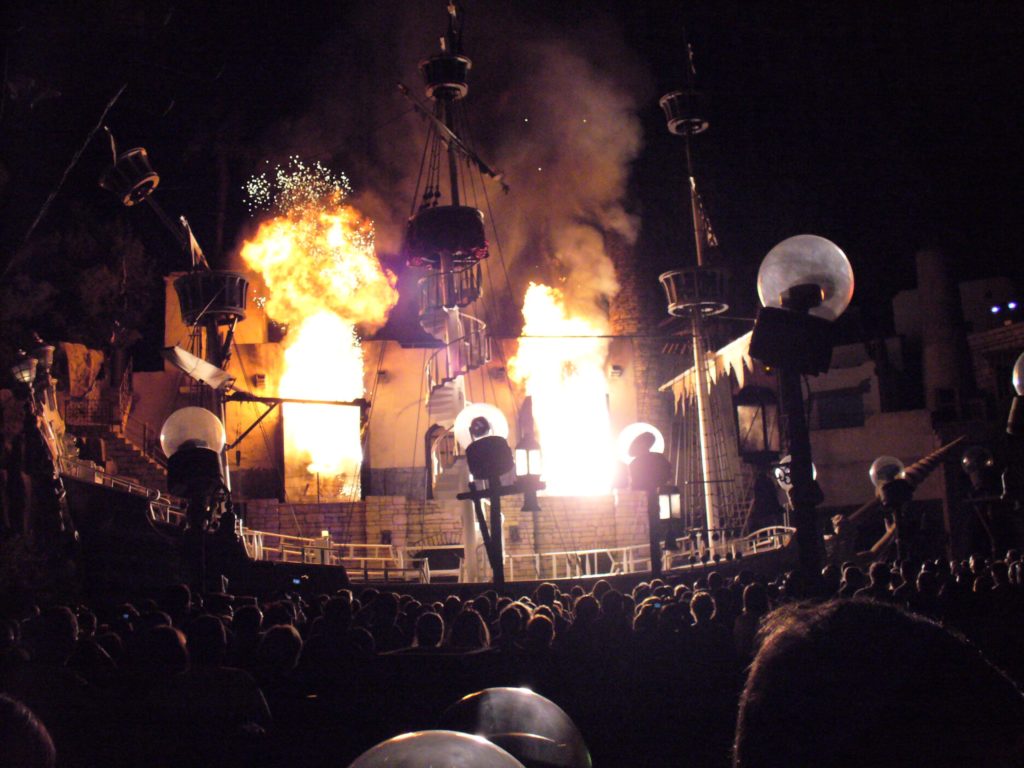 I ran to catch up with the other. We saw the other hotels too. Julian was constantly repeating that everything was a total kitsch, everything was made of plasterboard, and so on, but at this point I was immunized to negativism. I had the “pink glasses” on. We reached Bellagio. Julian and Zachary wanted to bet in the casino. We went in and they bet some money, but a little, just to say they have gambled. Everyone around us was having fun, dancing, singing. Elvis Presleys were popping out everywhere, singing very badly, but no one cared. It was colourful and fun. It was very late, and we were extremely tired of this intense day. We went back to the hotel and fell asleep like planks. We slept for about three hours and the alarms rang again. Today we were going to the Grand Canyon. It’s quite a long way from Las Vegas, and we were going to cross the distance with the van. We barely got off the beds. Julian offered to go to the hotel’s casino for waking up. Every hotel there has a 24-hour casino. We’ll get some coffee and bet some buck. After all, we’re in Las Vegas. I had no desire to bet on anything, but okay, for the cause, I’ll give a dollar to the slot machines. Since it was a bit ridiculous with this one dollar, the jokes started about what a nasty Uncle Scrooge I am.

Julian took the camera to record this memorable moment. I dropped the coin, pressed the button, the pictures shuffled, started to stop one by one, and the machine started to flash. At first, I thought I broke the slot machine, and I felt sick. Now, explain a lot, pay the slot machine. However, it turned out it wasn’t broken, but rather milked. I have won from the first time. Everything calmed down and the tokens began to fall. I watched like a guttersnipe who won the lottery jackpot. I won 40 dollars. It was very funny and we were immediately wide awake.

They also gambled a little without any luck and we headed for the Grand Canyon. It was a very long ride. We only stopped at Hoover Dam. We didn’t even know what that was. It was just a gap of ours, since that’s the main thing to see in this part of America. We stopped because we saw a lot of people and it was hard to pass with the car. It was only when we saw the vertical wall of the dam that we began to remember what that actually was. The size of Hoover Dam is impressive. And it is a mandatory stop before visiting the Grand Canyon. We quickly took photos and got back on the road. We had a long way to go, and the day was already halfway. After some hours, we reached the final point. There was another hour until 5 p.m. when the reservation was closing. We only had an hour. I felt very bad because one hour was too little time to see something like that. 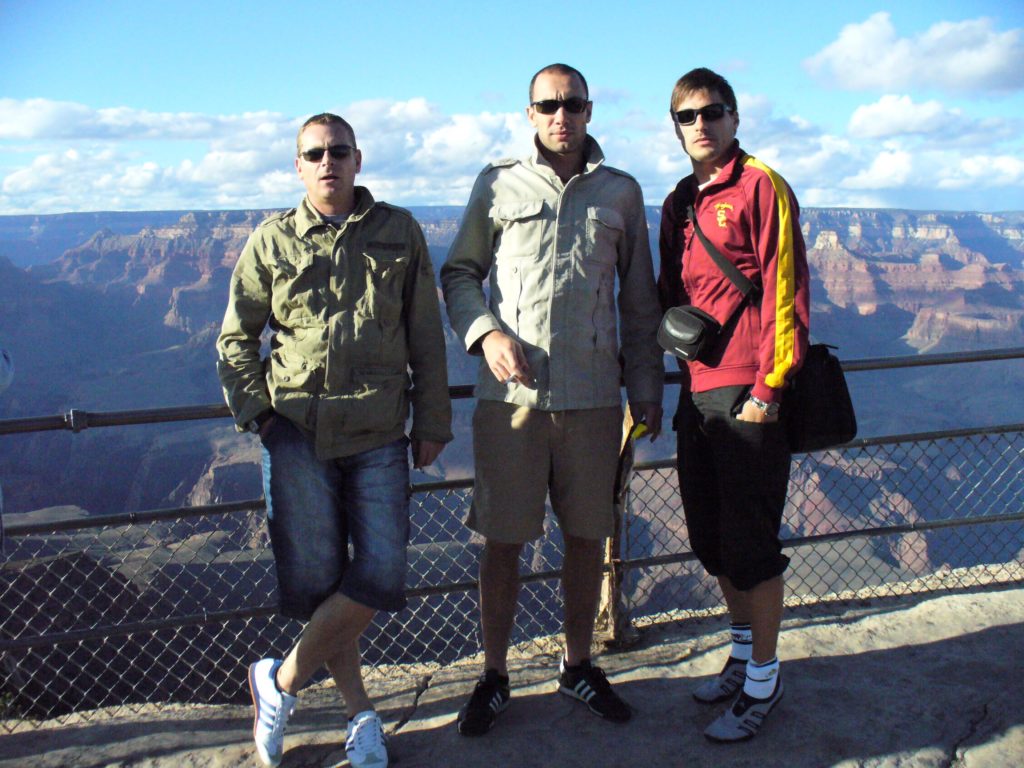 But better to see little than none. However, if you want to see the Canyon in its full scale and beauty, take a minimum of two full days. Unfortunately, we didn’t have this time so we headed for the most famous point of the Canyon with the most popular view. We took pictures again. We were really impressed – a deeply cut valley with steep, almost vertical stepped slopes, known as the Grand Canyon by the Colorado River. It’s no coincidence that in a BBC movie about the hundred places you should see before you die, it was on the first place. I’ve really travelled a lot and seen many things. Things created by man and by God. Those that are divine can make you cry and you carry them all your life in your mind. The others just impress you. The canyon was impressive, enormous and beautiful. I have no talent and self-confidence that I can write. I’ll just say – go there and see it, because words cannot describe that kind of thing. It was getting dark and we had to head back to Las Vegas. At least we had a glimpse of it. I shouldn’t be greedy, especially after the things that happened in the last days. We went back to Las Vegas, toured the casinos and hotels once again, the gamblers again didn’t win anything, and we went back to Stratosphere. Again, we were going to have very little sleep because the plane to San Francisco, our next stop, was early in the morning.