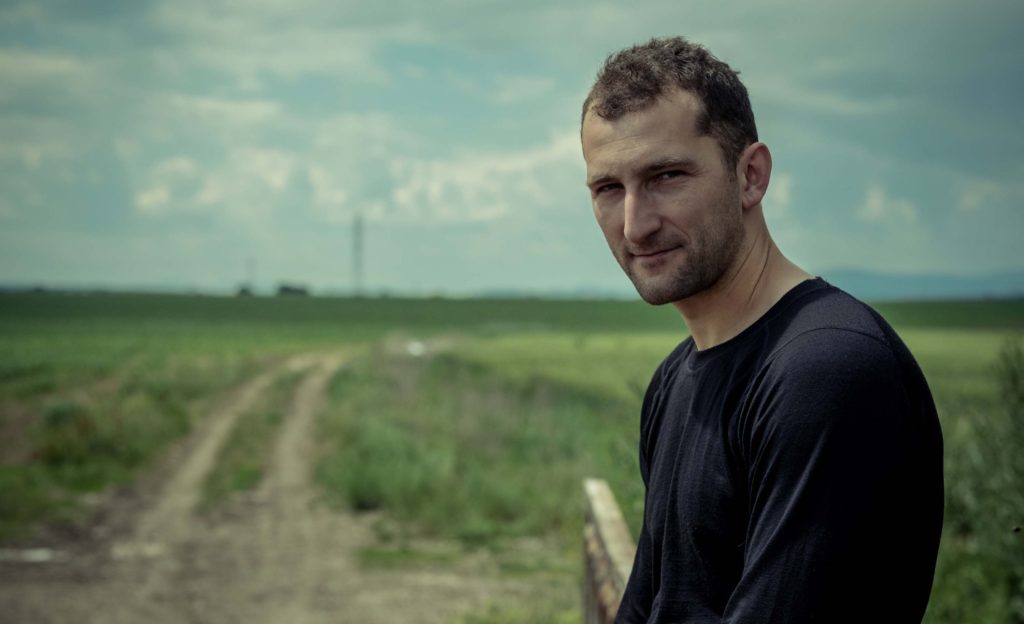 I am very happy that life met me with Tony. He is the perfect man in the context of today’s reality. Smart, well-mannered, educated, delicate, sharp, sensitive and frank. When I communicate with him I feel that my profession has slightly deformed me, I have lost the delicacy in communication, I am loud, too emotional, even slightly insolent. He is neither of these. All his qualities make him “look” like a refined gentleman from the mid-20th century. I think it’s exactly this difference that makes me interesting for him, but quite often I have felt embarrassed when we’ve been together. The main merit for his manners goes to his grandmother. He has talked about her and I have imagined her as the strict ladies from the old English films. Tony has started work when he was young, and on high positions. Old people say that a man should build a house and make a family. We are similar in this. We both have made homes, though his house is incomparable in scale to my apartment, but we both still have no family. 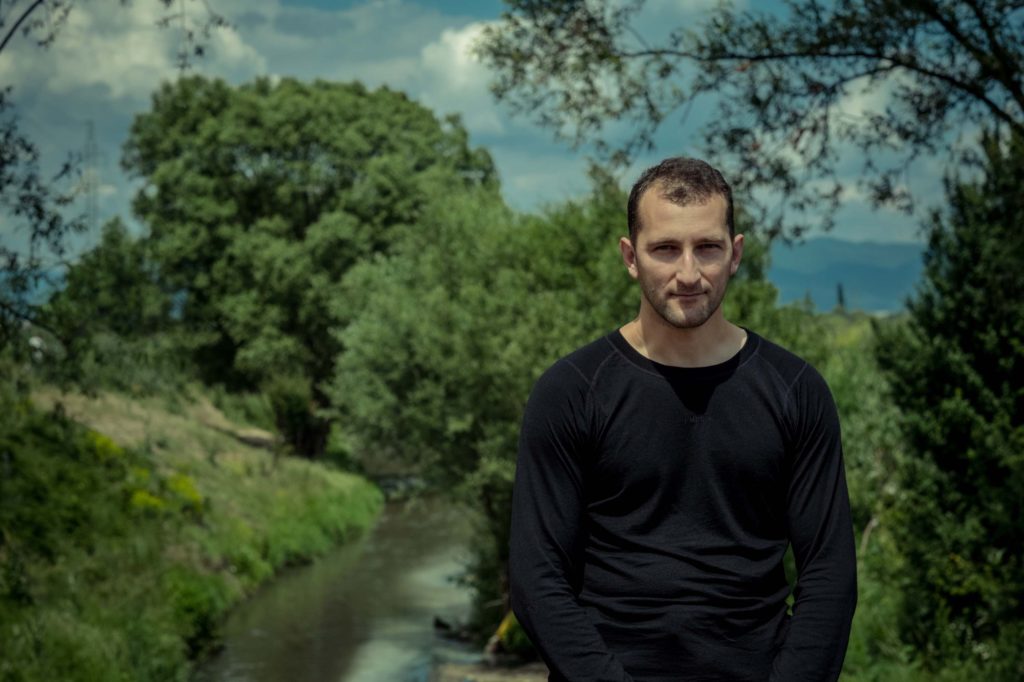 I met him around our common passion – motorcycles. I got a boutique machine, so to say, and this turned into an adventure. This model is not very popular in Bulgaria and the information is scarce. Tony and I have a common friend – the very good mechanic Rady. One day he told me about a boy who has the same motorcycle. He wanted to introduce us and he was sure we would get along well. And he did it. Tony came to the meeting, I was with my machine. He started examining it. He noticed quite few things on it, asked a few questions, and I realized that I am light years away from him concerning the knowledge in this area. He is technically literate. It is quite reassuring when you meet a bigger pedant than yourself. He is a pedant, mostly about motorcycles. And it should be so. It is a risky hobby. Everything needs to be flawless. 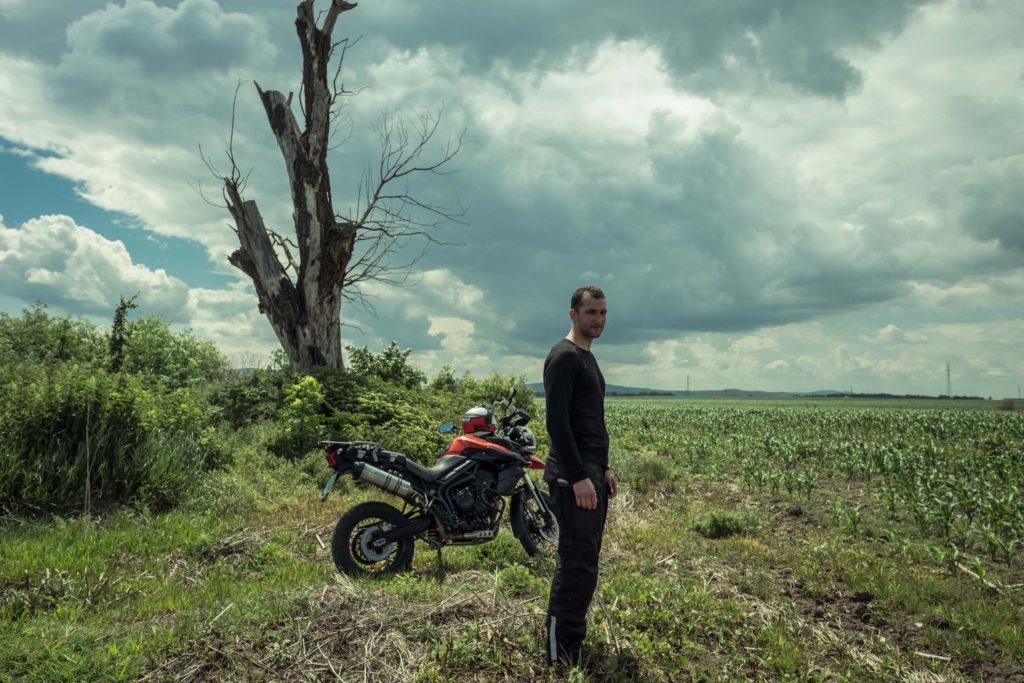 We started discussing many technical cases. Things happened that we easily compared. For example, my motorcycle dies at a traffic light, I call him and ask: “Tonka, has it happened to you – to die on idle?”. He says: “Yes”. It is a problem and he starts browsing through sites and forums until he finds a solution. We made ourselves something like a mini community. Mostly he was running things, I was watching, and if he was to ask me something – I was replying. Most times I was staring stupidly. But I was trying to understand. Really.

I will describe Tony with some events. There are only few people who are ready to help everyone without exception and in all circumstances. He really is such a person. We very rarely manage to go to the Serres circuit, to ride in peace and to improve. In general, when we drag ourselves there, we ride all the time and exhaust ourselves to maximum. Once, last year, we went there and Tony didn’t stop helping people with the suspension of their motorcycles. It’s his element. He constantly develops and he’s very good at it, I would even say – the best in Bulgaria. I ride, he helps. I went to him and told him to stop and start to ride. And he replied: “Their motorcycles are very bad and they will crash”, and continued helping them. That’s in his head all the time. How to help? He has a very good idea about to be realized, to organize a campaign that describes the most risky situations and motorcycle crashes, to turn the attention to them and to signal all riders, so they’ll be careful. It will be a good and reasonable campaign. He has his own blog and he often posts there valuable articles about the suspension of the motorcycles and other useful information. This blog helps many people to pay attention to their machines and to maintain them correctly. 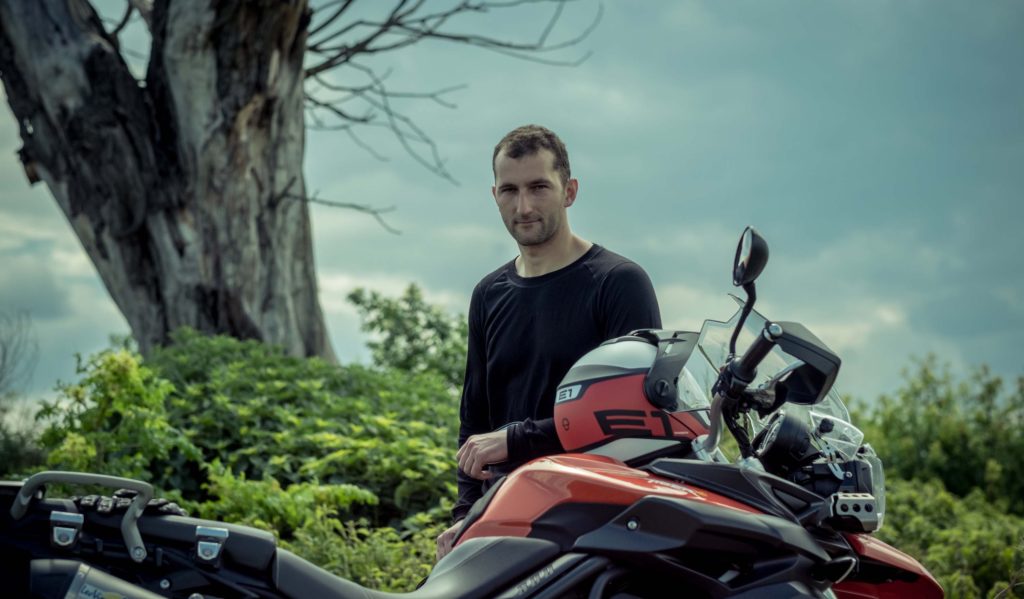 The brains of the programmers are strange and incomprehensible to us, mortals. Something like the brains of the surgeons. Programmers, even if they are to buy a toilet cistern, will make such a research that your head will reel. They will study all the toilet cisterns in the world, their functionalities, types, minimal deviations in design, their effectiveness… An ordinary brain like mine would not even think of all this. He has helped me a lot in these things. Once, I asked him about a screen I was planning to buy. I received an e-mail with such comprehensive information that maybe even the manufacturers of the screen in question don’t know. This is a quality I admire. But I definitely have no nerves for it! 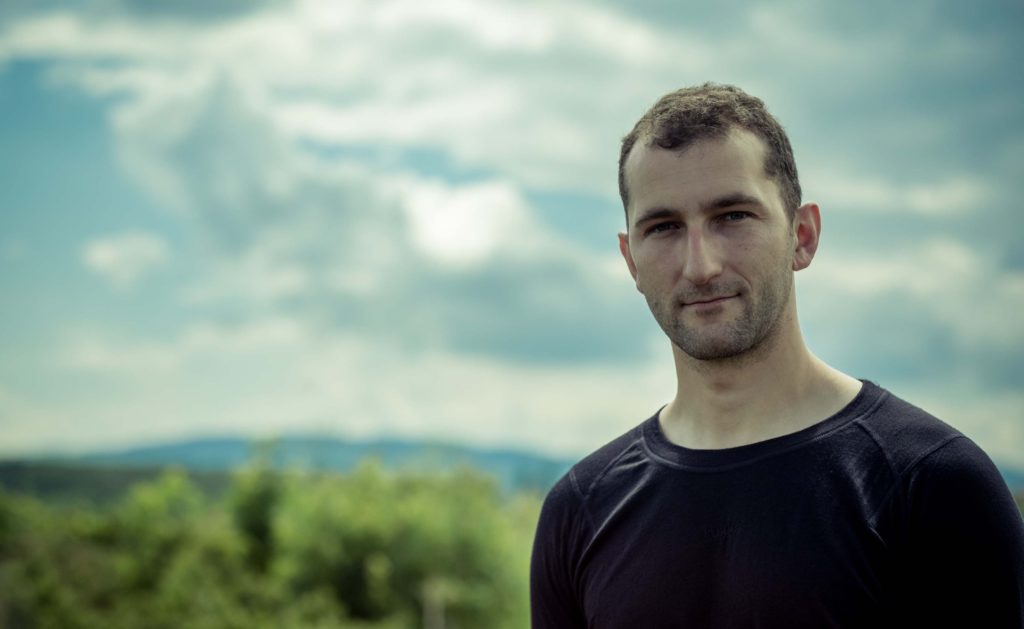 When I first invited him to the theatre to watch me, I was not sure what type of productions he would like. I started with “Art”. He doesn’t know, and many people don’t, that actors, being vain, always find so-called observatories (holes in the décor or in the curtains), where they watch the audience. I also have such. When the production started and I was not on stage, I carefully followed how he was watching. I realized that he liked it. Then I invited him to another production and again I watched from my observatory. He didn’t like it. I saw it and I realized for sure his preferences. He likes complex stories and texts that encourage you to think and follow the action. He doesn’t like plays that can only cheer you up and distract you. Not that I have thought anything different about him, but I had to try with different types of productions. There is no way such profound mind and thorough consciousness would like the simple. The more complex, the better.

Since Tony has been a manager of software developing teams in different companies and has a huge experience in this area, he decided to invent something himself. It is especially for all keen travelers – motorcycle riders. People who cross the world on two wheels seeking adventures and emotions. The gadget will show the whole trip as a route and photos on a special online community and will be a social network of the adventurers. I believe in this endeavour and I am sure it will be a world hit when it starts a mass production globally. He is so good in programming that when I was making my site I never dared to ask him anything. No, actually, once I did ask him something, but then I regretted it. I told myself it’s the same if someone asks me to stand against the wall and recite a poem. Something quite elementary that I don’t care about at all. 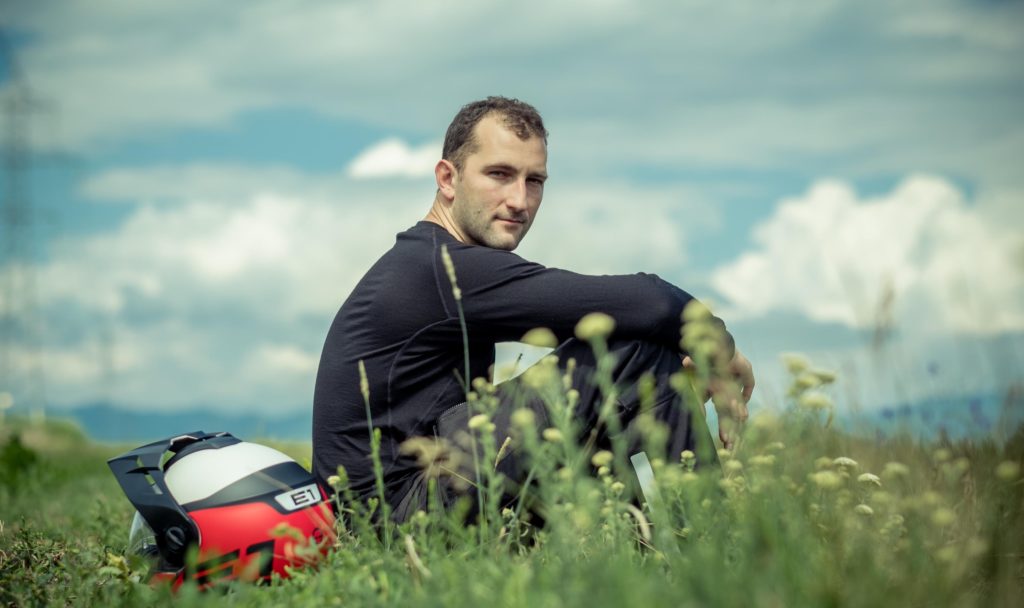 Another goal of his is to join as part of the crew some MotoGP team, more particularly Ducati. This is my only opportunity to get on a prototype and ride a circle. Tony is the only bridge to this dream of mine. I cross fingers for him and if it happens it will be great. He knows how to follow his dreams, what he wants and how to find a way to it. He takes different directions in life, but they are always very well thought. He makes the decisions with his mind, not with his emotions. I am quite the opposite. The last thing he told me was how he gave up on a big dream of his. I very much want to be able to decide things the same way. He very much wanted this, but he decided to go close enough to people who work his dream job and to draw from the source. He wanted to know, when he was an inch away from the dream, would he like it. He went, thought, assessed and made a decision that it would stay in the area of his hobbies. And he was thinking about it for a long time and was striving for it. 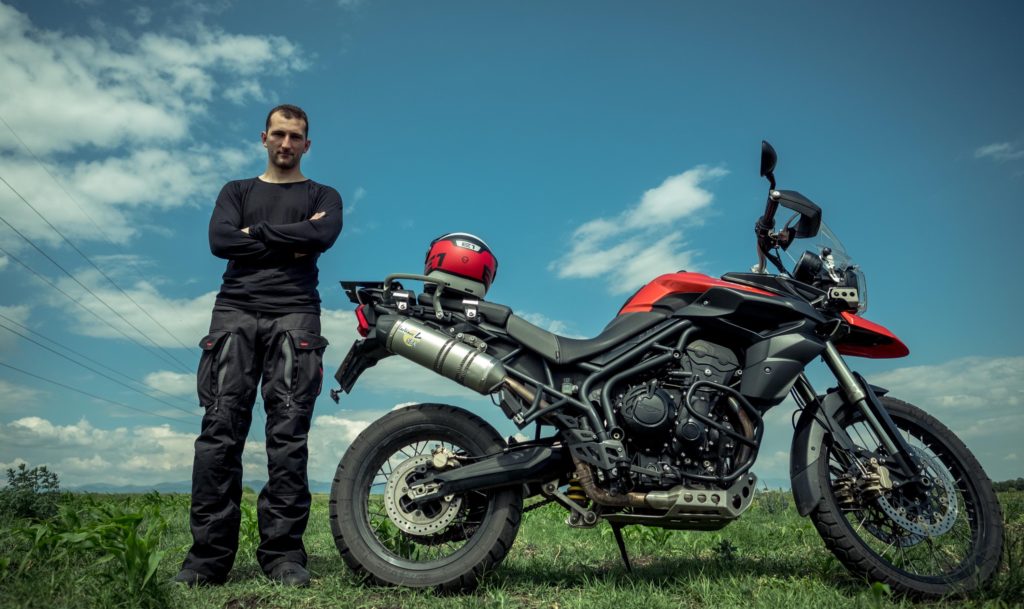 Tony is in the centre of the story with Viber. One day he told me that he and some friends of his are developing chatbots. Virtual reality that is attached to heavy public chats, to answer many questions of the consumers. It was the first time I heard about these chats and that they will replace the social media. So Tony introduced me to the boys from Connecto, they got me in touch with Viber, and that’s how the first Bulgarian Community happened.

Stoyan Haralampiev is one of the most valued people around me. He is valued because he is smart, in many ways I want to be like him and I try to imitate him. He makes me think about many things, he inspires me with his work. I sincerely cross fingers for him to conquer the world and to do something great. And he is only a step away from it – the great. 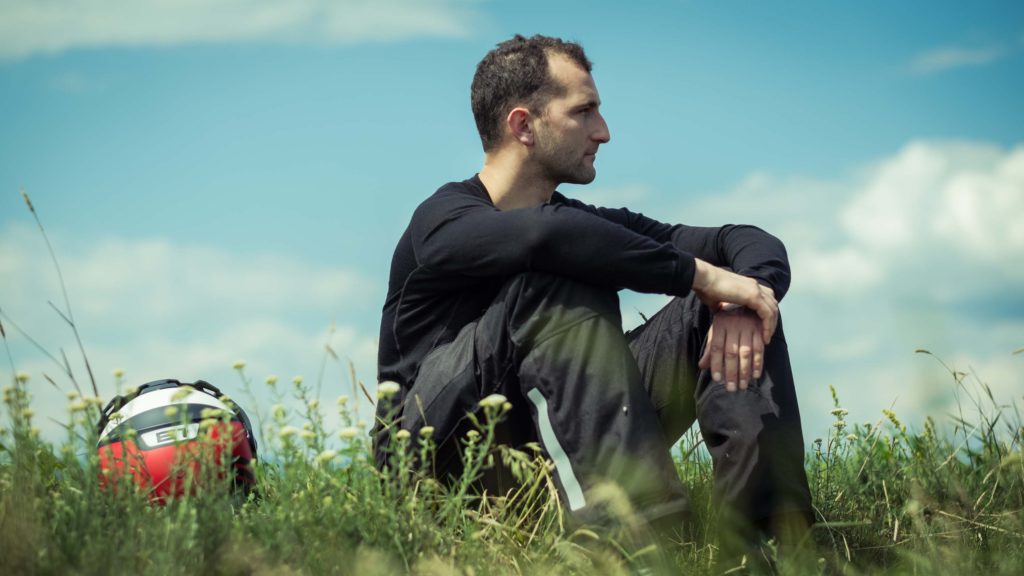 Here is some info about Stoyan Haralampiev in his own words: 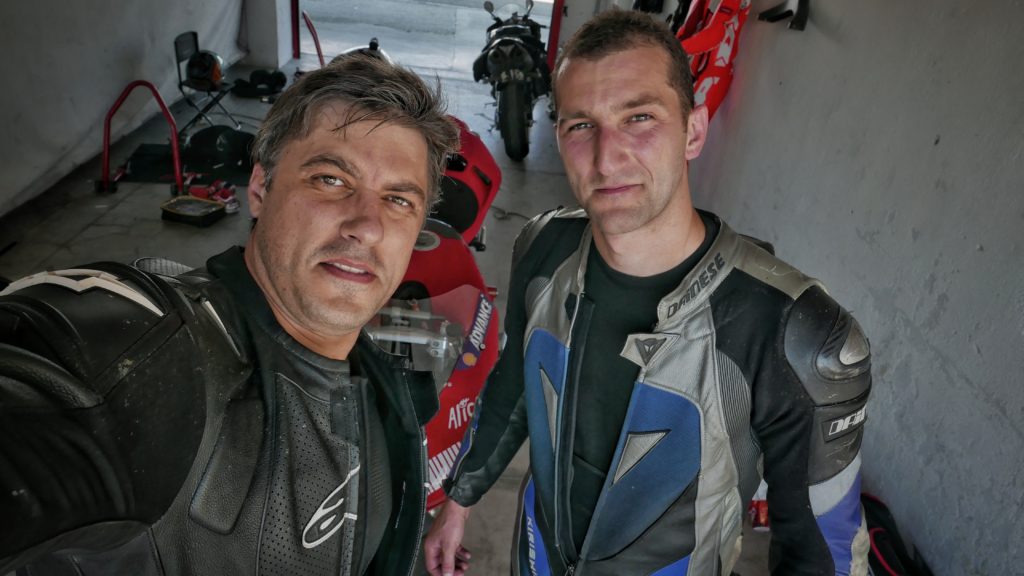 Visit Tony’s blog, it is obligatory for all motorcycle riders – BLOG